Regardless of whether you classify it as Alaskan noir, a revenge thriller, or metaphysical suspense, the new Netflix original movie Hold the Dark will maintain your interest from first frame to final shot. Based on William Giraldi’s well-reviewed novel of the same name, watching the film may lead some back to the original source, while those who have read the book will no doubt be anxious to see it come to life.

So, what is the film about?

Medora Slone is raising her six-year-old son in Keelut, Alaska while her husband is stationed in Iraq. Their small town has been plagued by a series of wolf attacks on children in the area. Medora is devastated when young Bailey becomes the latest victim so she reached out to famed nature expert, Russell Core. She wants this wolf hunted and killed. Holed up in the Slone cabin, neither Medora nor Russell know that Vernon Slone has been injured in battle and will be returning home shortly. Shocking revelations are about to be made and these three lives will never be the same. 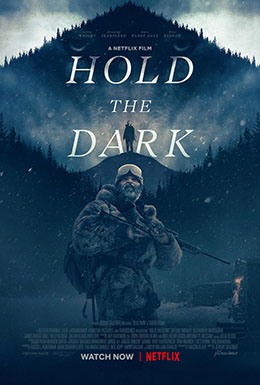 Alexander Skarsgård is probably best know for playing Eric Northman on HBO’s True Blood and Perry Wright on that same cable channel’s Big Little Lies, and here again he takes on a page-to-screen transformation with a character who is “morally-challenged.” His portrayal of Vernon Slone grounds the film and his cavalier attitudes toward death are truly chilling.

Jeffery Wright, whom viewers will recognize from such cable epics as Boardwalk Empire and Westworld, plays Russell Core. His sensitive depiction of this naturalist allows viewers to connect with this story in a way that might otherwise have been lacking. Suffice to say, Russell is the heart of the story while Vernon is the visceral blood pumping through the plot’s veins.

Anything else said about this tale would constitute a spoiler. The unexpected path through which the story travels will have viewers on the edge of their seats one minute and wiping away tears the next. Make no mistake about it, this is a violent tale, so viewers who are looking for something cozy should switch immediately to the Hallmark Channel. The unresolved conclusion will likely frustrate viewers who prefer cut and dried endings that wrap up every dangling thread, but much of the power of this piece comes from its ability to allow the viewer to ruminate on many of the decisions made throughout. This is about as psychologically complex a situation as one is likely to encounter.

All in all, I would say that for most crime fiction fans, Hold The Dark is a must-watch experience. It will no doubt lead some to a must-read experience as well. Either way, this is a tale not easily forgotten.