The Dead Will Tell –
The BOLO Books Review

There are quite a few authors who write mystery series set within the Amish community. Without question, Linda Castillo is one of the best and most popular. It just takes reading one of her books to see why. The latest novel in Castillo’s Kate Burkholder series is called The Dead Will Tell and while I don’t know what the dead think, I do know that I will tell you it is probably her best yet.

Linda Castillo’s series takes place in Painter’s Mill, Ohio. Kate Burkholder is the Chief of Police and often has to negotiate conflicts between the Amish folk and the Englishers.  In the case of The Dead Will Tell, however, the forces of evil reside solely within the peaceful Amish community.

It is often said that the sins of the past will be visited on the future. At the start of the new novel, readers are told of a crime which occurred in the settlement’s past. On the Hochstetler farm, one terrible night changed the destiny of this large family. At the end of it, Mr. Hochstetler is dead, along with four of his five children. To make matters worse, Mrs. Hochstetler is missing and only fourteen-year-old Bill Hochstetler remains to tell the tale of a group of masked men who broke into the family home and terrorized them. 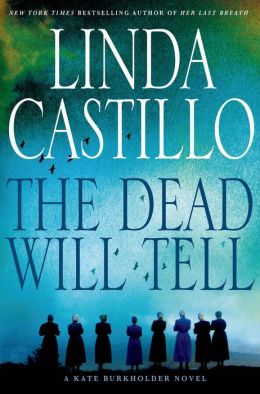 The Dead Will Tell by
Linda Castillo

Thirty-five years later, a series of murders in present-day Painter’s Mill draws Kate Burkholder in and all evidence seems to point to the events at the Hochstetler farm as a possible motive. Kate finds that each of the victims has an Amish peg doll made by Mr. Hochstetler left with the body.

The story that follows is convoluted and complex, but it is also completely believable and fascinating. Kate discovers that the case also has ties to a Swartzentruber community nearby.  Swartzentruber Amish are even stricter than the Amish readers are most familiar with and thus getting information from them proves difficult for Kate.

Linda Castillo complicates things for Kate Burkholder by creating tension in her relationship with John Tomasetti. Fans of the series have watched this relationship grow and change for five books and in The Dead Will Tell, yet another obstacle is thrown in their path. Like the mystery elements in the novel, the dynamics in this partnership always ring true and readers cannot help but hope they can work things out.

Even with this ongoing storyline, The Dead Will Tell is easily enjoyed by those new to the Kate Burkholder series. Don’t be surprised if you want to go back and read all of the earlier books, however. Linda Castillo is a true storyteller and her insights into the world of the Amish never fail to enlighten.