The Killer Next Door –
The BOLO Books Review
(UK Edition)

If you live in an apartment, condominium, townhouse, duplex or any other multi-family dwelling, you may want to think twice before reading the new Alex Marwood novel, The Killer Next Door. That said, if you don’t read it, you will be missing out on a hell of a story.

How well do you know your neighbors? It is probably true that very few of us really know what the lives of those around us are like. Even those closest to us keep things about themselves private. With her new novel, Alex Marwood dares to open those doors and reveal what lies on the other side. 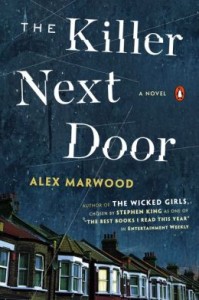 The Killer Next Door
by Alex Marwood

In the apartment complex at 23 Beulah Grove, the residents are resorting to all type of chicanery in order to keep their various secrets under wraps.  We know from Alex Marwood’s previous novel, The Wicked Girls, that she excels at exposing the darker underpinnings of society, but here she takes her talent to new levels. The Killer Next Door is not for the faint-hearted, but anyone who can stomach this book’s most horrifying elements will be rewarded with an ending that will resonate for years to come.

While Collette is the character given the most page-time, it would be incorrect to call her the main character. In fact, each of the residents of 23 Beulah Grove is given their moment in the spotlight, and as such, the novel is very much an ensemble piece. It is true that readers know many of Collette’s secrets right from the start, even if her fellow residents do not, and because of that readers are likely to relate most directly with Collette. But each of the characters is intriguing and in most cases, charming – which in and of itself is pretty scary when you finally see what they are each up to.

After witnessing a crime, Collette has been on the run from some very bad men for a while now. 23 Beulah Grove is just the latest in a string of layovers as she attempts to ease her paranoia. Because of her mother’s illness, she chose Beulah Grove to be close by in case she is needed. This might be risky, except for the fact that Collette isn’t even her real name. 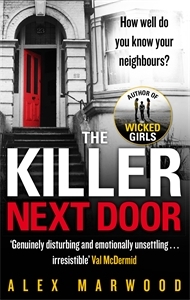 However, unexpected events at 23 Beulah Grove cause Collette to bond with her fellow eccentrics and ultimately she must choose to ditch them or risk everything by taking a stand. In just a short span of time, she has come to think of these neighbors as friends. Whether it is Cher, the teenaged runaway who stimulates Collette’s maternal instinct or Hossein Zanjani, the exotic foreigner who causes her heart to flutter just a bit faster, Collette finds herself increasingly entangled in their lives.

The future-set prologue gives readers insight into where the story is going, but the getting there takes some curves and bumps. The Killer Next Door moves along at a perfect pace, culminating in a dénouement that is at once, both completely unexpected and inevitably obvious. It is the skill with which Alex Marwood spins her tale that allows her to obfuscate this ending from the reader and ultimately cause surprise with this logical conclusion.

NOTE: The UK edition is now available, while the US version has a release date of October 28, 2014.

Disclaimer:  An e-galley of this title was provided to BOLO Books by the publicist.  No review was promised and the above is an unbiased review of the novel.