The name Matt Coyle may not be one that you are familiar with, but it is only a matter of time. Coyle’s debut novel – Yesterday’s Echo – was lavished with critical acclaim, racked up award nominations (and more than a few award wins), and secured a devoted fan base. Now, Night Tremors, the second book in Coyle’s Rick Cahill series is out and seems destined to follow a very similar path.

Night Tremors finds Rick Cahill working as a private detective, mainly dealing with infidelity cases. While this job brings in some money, it also leaves Rick feeling slimy and in constant need of a shower. When he is hired to find evidence to help free a man from wrongful imprisonment, he jumps at the chance – even if he is less than convinced of his new client’s true innocence.

Randall Eddington was convicted of killing his step-father, mother and sister when he was only eighteen years old. Eight years later, his step-grandparents want Rick Cahill’s help in clearing his name. Of course, this puts Rick in the line of fire of his old nemesis, Tony Moretti. Moretti is the Police Chief in La Jolla, California and there is certainly no love lost between these two. It just so happens that Moretti was also involved in the original Eddington investigation. 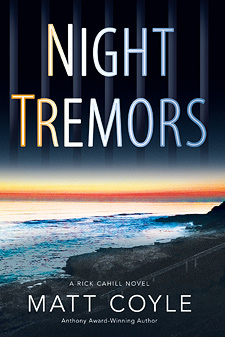 Making matters more complicated, the case also pits Rick against the “old money aristocracy” of La Jolla. This is in sharp contrast to the seedier sides of San Diego to which the case continually wants to lead him. Dodging a brutal biker gang only adds to the fun – if by fun you mean wondering if you are going to survive to see another day.

Matt Coyle wastes no time with a slow introduction in Night Tremors. Readers are quickly thrown into the action and each new avenue Rick investigates opens up new possibilities, new suspects and new dangers. The accelerated pace keeps the pages flying and the eyelids open. Night Tremors is a novel that moves at breakneck speed without ever feeling rushed.

At the center of it all is Rick Cahill – a character who is humanly flawed. What makes him so endearing to readers is that he knows he is not perfect, he knows his own limitations, and he still – even after all he has been through – always wants to do what it inherently “good and “right.” Complex characters with this much backstory so early in a series are rare, but Coyle succeeds in making Rick Cahill feel real and relatable.

No review of this series can skip over the setting. Matt Coyle brings the quirks of La Jolla alive for readers regardless of their familiarity with the area. He goes beyond the tourist veneer and exposes the dingier and sleazier side of San Diego and its environs. But in doing so, he also makes the area another character in his tale. Night Tremors is an example of a novel where the setting is as paramount as the plot.

As happened with Yesterday’s Echo, by the time readers reach the end of Night Tremors, Rick Cahill is in a very different place than when things started. This is good news as it means there are still layers of this man to be uncovered and more novels by Matt Coyle in which that excavation can occur.