Little Pretty Things is like a literary mash-up of Judy Blume and Megan Abbott, told in what is becoming the distinctive voice of its creator, Lori Rader-Day. On the surface, Little Pretty Things is about the death of Madeleine Bell and how her closest childhood friend, Juliet, attempts to ensure that her killer is brought to justice. Just under the surface, however, is a tale of adolescence reached in small town America, the resilient yet tenuous bonds of female friendship, and the shadow cast when children are treated as commodities.

As far as titles go, Little Pretty Things is a winner and it does much heavy lifting before the cover is even cracked open. Through multiple turns of that phrase within the text, Rader-Day expands the novels themes in multiple directions, each with the same center point – Juliet Townsend.

LITTLE. Since much of the novel works as a memory piece, with Juliet repeatedly reminded of her past by actions and items encountered in her monotonous current life, the most obvious meaning of this word calls to mind children. Even though much of the novel reminisces back on the high-school days of Juliet and Maddy, for all intents and purposes they are still considered “little” by the adults around them: in size, age, and as we find out as the story progresses, worth. But “little” also reflects the size of their hometown, which directly influences the scope of their hopes and limits their options for the future. And in a more concrete way, “little” refers to the tiny, insignificant objects that Juliet pilfers from the Mid-Night Inn’s motel rooms as she is cleaning them. 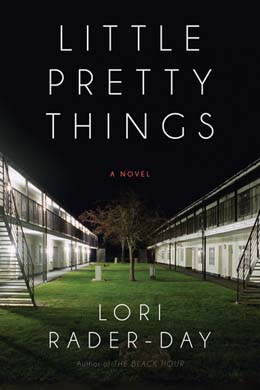 Growing up, Juliet would never have guessed that her future would see her working at the Mid-Night Inn. Thankfully, in a town that is practically devoid of ambition, she blends right in. That is until the night that Maddy Bell returns to her hometown and checks into the Inn. By the next morning, Madeleine is dead and as her long-time rival (and longer-time friend) Juliet, looks anything but innocent.

PRETTY. This is a loaded word by itself, but in Rader-Day’s hands it becomes both a badge of honor and a burden to be borne. Society measures the value of a person – girls in particular – by how “pretty” they are. Those deemed worthy are viewed as privileged and lucky, while those who are not are considered less-than and have to work that much harder to keep on a level playing ground. It is no surprise to anyone when Maddy is able to escape from Midway, Indiana and begin a jet-setting life in cosmopolitan Chicago. Even something as simple as the pretty engagement ring she flashes upon her sudden return is envied by the town she left behind. And yet, Juliet still finds herself drawn to the pretty, but everyday, ephemera she keeps hidden in her secret hideaway at home.

As young women, Maddy and Juliet made names for themselves as members of the Midway High track team. While the murder is being investigated, the temporary closing of the Inn causes Juliet to take on some substitute coaching assignments at her old high school. Being back in this environment, Juliet begins to see the toll such constant competition can take on young people. Juxtaposing this with her own exploration of Maddy’s death (and life) causes Juliet to re-evaluate the trajectory of her own life as well as the lives of the current crop of Midway High students.

THINGS. This simple word can have powerful connotations when linked to its subject. At the very core of the novel is the idea that girls are “things” to be cherished, controlled, and exploited. But it is also about the trophies we long for, the goals we strive toward, and the dreams we allow ourselves to dream. Always coming in second has conditioned Juliet to believe that this is all she deserves. Juliet’s life has stagnated and the unique bonds forged in friendship have shattered. Only in picking up those pieces can Jules come to realize that like the worthless trinkets she steals, an object’s true value is determined by the individual who possesses it.

With Little Pretty Things, Lori Rader-Day has written a modern classic exploring society’s treatment of children – especially young women – and how such treatment manifests itself in the psyche of those exploited. Everyone reading will see facets of themselves in Juliet, Maddy, and the other students and by the time readers reach the dénouement – set during their high-school reunion – justice will be forefront on their minds. Fortunately, Rader-Day manages to tie up all the plot threads and gives readers one of the most satisfying reading experiences of the year to date.