A Rising Man is Abir Mukherjee’s debut historical mystery. It was nominated for the the 2018 Best Novel Edgar Award, so a review hardly seems necessary. But a concerted effort must be made to celebrate the diversity within the crime fiction genre, so this series must be highlighted as one of the best.

The main protagonist of A Rising Man is Captain Sam Wyndham, a Scotland Yard detective relocated to Calcutta in 1919 where he serves as the newest member of their police force. Sam arrives in India with little knowledge of the culture and a desire to forget some of his personal demons. Readers will immediately be taken with this admirable man who is just trying to make the right decisions. As the novel progresses, it becomes clear that one of his colleagues, “Surrender Not” Banerjee, will also be a long-standing fan favorite. Sam – as a white man out of his element – and “Surrender Not” – as a native Indian citizen – together make for a formidable duo; each of them brings certain unique skills while also off-setting the limitations of the other. 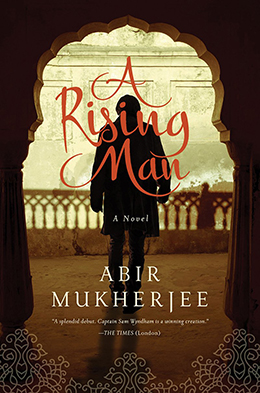 Not long after setting foot on Indian soil, Wyndham becomes embroiled in his first major investigation. A ranking white officer is found dead in the alley outside of a brothel. Stuffed in his mouth is a note warning the British to leave India. So, not only do Sam Wyndham and his team need to navigate the challenges of a murder investigation, they have to do so while avoiding the political landmines that seem to be the root of the crime.

Meanwhile, it’s possible that a train robbery in which nothing much was stolen may have unexpected connections to Wyndham’s murder case. Before long, all evidence points to a infamous terrorist who just happens to be in Calcutta. Everyone is ready to place all the blame at this man’s feet, but Sam Wyndham is not convinced and his doubts may put he and his team in mortal danger. Coupled with his post-traumatic stress anxieties as a result of his military service, what seemed like a more laidback job assignment is turning out way more challenging than imagined.

Abir Mukherjee’s ability to bring Raj-era India to life and make it feel relevant to modern readers around the world is to be commended. The issues at hand are not that different from problems in various Nations still today. Even those with limited knowledge of this time-period will understand how the Rowlatt Act served to strip citizens of their rights and led to greater conflict in the already volatile area. It may seem that a large part of the novel is devoted to the interactions between the White occupiers and the native Bangladeshis, but this is only because it was such a significant part of daily life during this controversial historical period.

It is the partnership between Sam Wyndham and “Surrender Not” Banerjee that is the true star of the novel. As they get to know each other better, readers watch as the mutual admiration between these two men blossoms in a time when their friendship alone would have been looked down upon by both of their individual cultures. Wyndham is not a flawless man, but he is good and fair and refuses to allow injustice to occur. Whereas, Banerjee is unassuming and shy, but also extremely smart – not only about his native culture, but about human nature in general.

Distance and time will prove them to be a classic crime fiction pairing and readers have Abir Mukherjee to thank for bringing them to life. A Raising Man is but the first novel in what is sure to be a long and exciting career.