Over the course of eleven novels, Louise Penny has amassed a legion of fans who anxiously await the release of a new Inspector Gamache novel each year. This year’s entry, A Great Reckoning, is one of the best in a series that has already reached great heights in terms of both critical and popular success.

Loyal readers have followed Armand Gamache and his circle of friends through many highs and lows. Now retired from the Sûreté du Québec, A Great Reckoning finds Gamache beginning a new career – as the head of the Sûreté Academy. Since he has previously laid assault to the cult of brutality in the Sûreté itself, this new position affords him the opportunity to influence the next generation of cadets before they are released from the teaching environment into active duty. 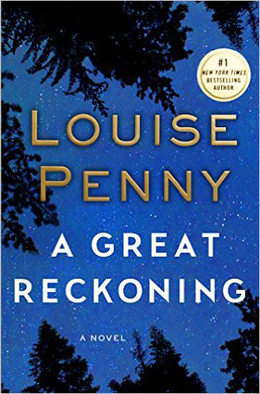 A Great Reckoning by Louise Penny

Unfortunately for Gamache, a death within the hallowed halls of the Academy makes for a rocky start to this new assignment. What it provides for readers is a closed circle mystery. With a limited number of suspects – including Armand Gamache himself – Louise Penny builds suspense while also addressing higher theoretical topics such as loyalty, revenge, guilt, grief, and forgiveness.

Discovered at the crime scene, a strange map of Three Pines acts as a secondary mystery that is every bit as engaging as the murder investigation. This map was originally found hidden within the walls of Olivier and Gabri’s bistro and was gifted to Gamache at the start of this new job. Wanting to know more about its origins – and feeling it would be a great teaching opportunity – Gamache assigned four students to decipher the history and meaning of the document. What they find raises more questions than it does answers.

One of those cadets, Amelia Choquet, seems to be of particular interest to Gamache. Originally rejected from the Academy, Armand chose to allow Amelia to enroll even though her piercings and tattoos appeared contrary to the role of officer in the Sûreté du Québec. Even the Three Pines villagers begin to believe there is a connection between these two that they are not sharing – a history that might be better left in the past.

While Louise Penny is based in Canada and writes a series set in that country, it is clear that she is aware of, and concerned by, the issues facing police departments around the world. The culture of corruption documented within the pages of A Great Reckoning is probably more common than any of us would like to think. By addressing this in what is essentially a novel of entertainment, she makes strides to educate us all and do a small part to make us all better people.

Like the great philosophers of old, Louise Penny has an amazing understanding of people. Of what they need, what they fear, and what they dream. One of the themes that runs through A Great Reckoning is the idea that things – and people – are rarely what they first appear. “Don’t believe everything you think” readers are told by Gamache, his friends and family, his colleagues, and yes, his creator: Louise Penny. If ever the world needed a message, this is the one – and this is the time.

It has long been said that readers are shaped by the books they read. Those who dive into A Great Reckoning, or any of Louise Penny’s novels, will hope that even a small part of her wisdom will find its way into their hearts and souls. If that happens, the world will be well on its way to the healing it so desperately needs.

“Not every mystery is a crime…But every crime starts as a mystery. A Secret. Some hidden thought or feeling. A desire.” (A Great Reckoning, page 76)