The Girl Without a Name –
The BOLO Books Review

Last February, Sandra Block introduced readers to Dr. Zoe Goldman in Little Black Lies, one of the strongest debut mysteries of the year. Now, Zoe has returned in The Girl Without a Name. While some things in Zoe’s life are different, what has remained the same is the quality of Sandra Block’s writing.

When last we left Dr. Zoe Goldman, unusual circumstances had not only put her life at risk, but also her future career as a forensic psychiatrist. As such, The Girl Without a Name opens with Zoe on probation and working with a new supervisor, Dr. Tad Berringer. Some of the team and patients from Little Black Lies also make cameos in this new novel. 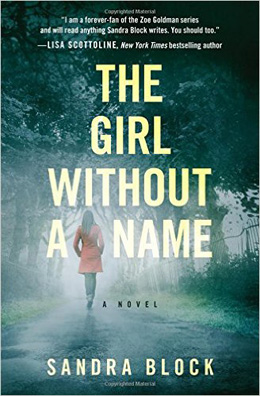 The Girl Without a Name by Sandra Block

Zoe spends much of The Girl Without a Name trying to gain control of her ADHD, prepare to take her exams, and treating new patients. One of those patients is a teenaged African American girl who is admitted to the Buffalo, New York hospital in a catatonic state. Unable to determine the cause, the various treatment options sometimes cause conflict within the residency group. As if that wasn’t enough, Zoe is also dealing with a wedding invitation from her ex and her ever-evolving relationship with her brother.

Since no one can determine who the catatonic girl is, this allows Sandra Block to imbed some subtle, but effective commentary on how institutions such as hospitals, the police, and the media deal with non-Caucasian subjects. By not allowing this to become too heavy-handed, Block avoids making this a central element of the novel, but still manages to address what is a serious problem in today’s society.

Another interesting element that Sandra Block introduces is this relationship between a young professional (Zoe) and her older mentor (Dr. Berringer). Readers will quickly realize that Dr. Berringer may have ulterior motives in getting close to Zoe, but their interactions ring true to many mentor-type associations. So when she finds out that he is a functioning alcoholic, Zoe is forced to make some tough calls in regards to morality and her career prospects.

The beauty of the writing here is that while some of the subject matter is technically advanced, Block presents it in a manner that is both easy to read and to understand. The Girl Without a Name is a quick and satisfying read with just enough surprise developments in the plot to keep readers glued until the end. The mind and the behaviors caused by it are some of the most complex parts of being human, so hopefully, readers will get to see many more future cases for Zoe Goldman to unravel. Whatever Sandra Block writes next – count me in.