In Bouchercon 2015 Raleigh Part One, I covered Wednesday – Friday. Now I would like to talk a bit about Saturday and Sunday. Part Three (and the final part) of this series will be a post about the most coveted books I obtained while at the conference.

Saturday dawned with a sense of freedom. On this day, I had no moderating or volunteering requirements, so I able to let the spirit move me and go where the wind guided me.

I wanted to support both the new authors and my friends Les and Leslie Blatt, so I got myself early enough to attend the New Authors Breakfast. Similar to the Author Speed-Dating in some ways, this event was less hectic and loud. Instead of authors traveling from table to table, they were called up to the podium in lots of five and gave their one-minute pitch to the audience via the microphone. Authors were still seated at tables with fans, so that interaction was also still possible. Many of my friends (both online and in-person) were up there pitching and they all did a wonderful job. And even I came away with interest in 1 or 2 books that I had somehow missed hearing about. The standout winner of this event however, was John Edward Mullen, author of Digital Dick. Since his book is about an artificial intelligence computer who solves crimes, John allowed his “robot” computer to travel into the room unaided and make the pitch for him. Hearing that pitch in the digital voice of the character really sold the audience and I suspect resulted in some books sales. Awesome job John.

Needless to say, there was quite a bit of time spent in the bookroom for me as well -Purchasing books, getting books signed, and generally mingling with the crowd. Like the bar, the bookroom is the place to be if you want to see folks. 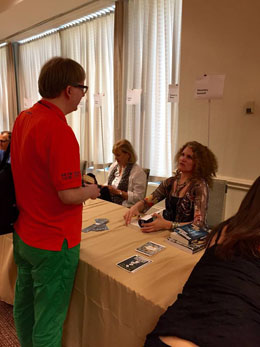 I had wanted to make it to the “Crime & Mystery” meets “Horror & The Weird” panel, but got distracted along the way. Since I really wanted to hear Chris Holm (author of The Killing Kind – my favorite book of the year), I did buy the audio recording of this panel and have since listened to it. It was fantastic and along with Chris, David Morrell, Reece Hirsch, and Tim Weaver really tackled the topic from many angles and entertained along the way.

Mulholland Books was hosting the Hospitality Suite this morning, so I had to pop over there to see some of my favorite publishing peeps, Pam Brown and Josh Kendall. I also made sure to snag a copy of David Swinson’s The Second Girl – a book that is generating some strong pre-publication press. 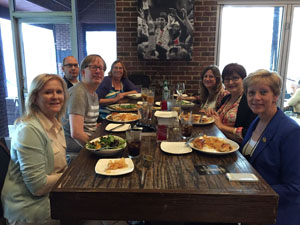 our lunch gathering, courtesy of the waiter.

The wonderful Kathy Boone Reel grabbed me for a lovely lunch with her friend Susan Matchett, authors Anne Cleeland, Elly Griffiths, Jonathan Moore (who provided me with an ARC of his debut The Poison Artist) and publicist Katrina Kruse. This was a really nice oasis in the midst of the craziness that is Bouchercon and thanks to Kathy for thinking to include me.

Then it was back into the madness – literally. I went to the Psychopaths, Serial Killers, Sociopaths & Human Monsters panel. Not sure what it says about me, but this was another favorite of mine. This panel was skillfully moderated by Debbi Mack and panelists Reed Ferrel Coleman, Steve Hamilton, Jennifer Hiller and Michael Robotham all managed to entertain and whet the appetite of the audience who no doubt rushed to the book room to make purchases.

It will come as no surprise that I ended the panel-going day with another dark panel. This time: The Journalist, the Writer & the Darkside of Human Nature. Some of my favorite authors were on this panel and they did not disappoint me. Craig Robertson – whom I had the pleasure of first meeting earlier in the weekend on the Scarlet Couch of Infamy – grilled Mark Edwards, Larry Light, Stuart Neville, and Alex Marwood about the connections between journalism and crime fiction. I doubt that anyone was disappointed in this panel. There was insight into writing, tons of laughter, and many accents to swoon over.

Before dinner, we had to pop in and watch the Anthony Awards of course. Congratulations to all the winners. Please be sure to check out the work of all the nominees, as there is some really fine work included in this year’s list.

Sunday arrived with its typical mix of joy and melancholia. Joy that there is still a few more panels to attend, but also the knowledge that things are once again coming to a close and friends, new and old, will be returning to their everyday lives.

My first panel of the day was a craft panel called Technique: Do you plot or do you follow the Muse? I mainly attended because I have wanted to see Ingrid Thoft on a panel for years and this was my chance. I really enjoyed her comments on the topic and the other panelists: Jane Cleeland, Kathryn O’Sullivan, and Michael Wiley were all engaging for the early hour. And of course, you can always count on Brad Parks to moderate with a mixture of seriousness and laugh-out-loud humor.

Unfortunately, the last panel I attended was also the one I would say missed the mark the most. It was the Room for all: The Diversity of Crime, Mystery, and Thrillers panel. Don’t get me wrong, all the panelists and the moderator did a perfectly fine job of talking about the topic, but there is just something shocking about walking into a Diversity Panel to see all white faces and only one woman sitting on the podium. In their defense, Joel Gomez-Dossi, Larry D. Sweazy, Brian Thiem, and Wendy Tyson all have very diverse characters in their works, so they could accurately describe this from that perspective – but it would have been nice to have had one of the Asian or African-American authors on the panel to address the issue from that point-of-view as well. 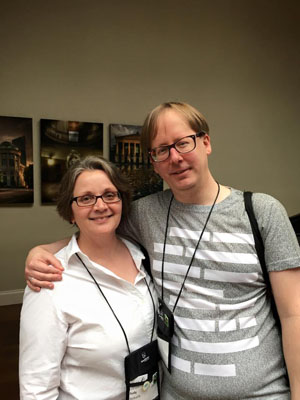 Judy Bobalik and myself (photo by Amanda Kyle Williams)

With that last panel, I gave some last minute hugs to folks and sadly said good-bye to my tribe. Next year, Bouchercon is in New Orleans and it promises to be a heck of a party…er…conference. I am sure to see many of the same faces there and hope that those of you who are reading this to learn more about what the Bouchercon experience is like will take the leap and give it a try. For folks who read and write about murder, we really are a very friendly group. See you NOLA!