Where It Hurts –
The BOLO Books Review

On any list of under-appreciated crime fiction authors, the name Reed Farrel Coleman is sure to appear. A critical favorite with a very loyal fan base, Coleman has yet to become as popular and name-recognizable as his talent warrants. With the release of Where It Hurts, the first in a new gritty crime fiction series, he just might be making the first step toward rectifying that oversight.

Reed Farrel Coleman’s strength is his ability to evoke emotion and empathy with the words he places on the page. Coleman writes novels like poets compose stanzas – that is, each word is carefully chosen to illicit maximum impact. Language is clearly very important to Reed Farrel Coleman and thus, every word on the printed page has a reason. Because of this, Coleman is able to bring his characters to life in such a way that readers expect to run into them at the local grocery store.

With Where It Hurts, Reed Farrel Colman introduces readers to Gus Murphy, a down-and-out retired cop living in the blue-collar section of Long Island. Gus’s life was constructed like a grenade, with his son acting as the pin holding it all together. When his son’s is killed unexpectedly, that safety pin is removed and Gus’s existence is shaken to the core – everything from his job to his marriage, maybe even his sanity, explodes and now Gus is just trying to pick up the pieces. 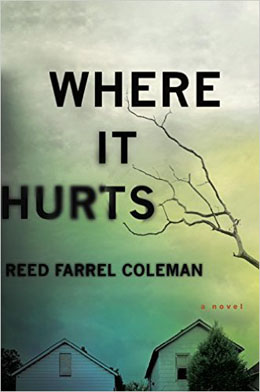 Where It Hurts by Reed Farrel Coleman

So when ex-con Tommy Delcamino asks for Gus’s help in bringing Delcamino’s son’s killer to justice, the assignment becomes as much about coming to terms with the death of his own son as it is about uncovering corruption at the highest levels. His investigation brings him into contact with more than a few nefarious individuals, but Gus manages to hold his own without sacrificing his moral core.

Reed Ferrel Coleman populates Where It Hurts with countless fascinating characters, some of whom are sure to be developed as the series progresses. But make no mistake about it, the novel belongs to Gus Murphy. In Gus, Coleman has crafted a character who readers will feel good about championing. Gus is an inherently good guy caught up in some less than stellar situations – the cards dealt to him would be more than enough to crush a weaker soul.

The setting of blue-collar Long Island adds to the noir feeling of Where It Hurts, but it is too simplistic to call this novel noir. Certainly there are elements that are common to this darker and more depressive sub-genre, but there is also a glimmer of hope. Whether this hope will ever be realized remains to be seen, but readers who are not fans of traditional noir writing will still find much to admire in Where It Hurts. Reading Reed Farrel Coleman is like taking a breath of rarefied air which is finally available to the common man.