The power of a novel can often be weighed by how long after finishing it the story remains in one’s mind. One of Erin Kelly’s earlier novels, The Burning Air, is one that continually comes up in discussions of plots that resonate in the mind for extended periods. Next week He Said/She Said will appear on bookshelves and it is another Erin Kelly masterpiece that will have readers ruminating on its merits for a long time to come.

He Said/She Said is a wonderfully complex story documenting the ways we deceive each other, the lies we tell ourselves, and the everlasting power of betrayal. Told in a confident and honest voice allowing every twist to ring authentic, this novel reinforces Erin Kelly’s stature as a rising star of crime fiction.

Ostensibly, He Said/She Said is about a couple – Kit and Laura – who while on a longed for excursion to watch a solar eclipse in Cornwall witness a horrific act of violence. Well, to be honest, only Laura witnesses it and when the perpetrator presents a different account of events, Laura begins to doubt what she saw. Later, when the victim of the crime shows up on their doorstep, Kit and Laura realize just how grateful she is for their support through the difficult trial that followed. That is until her behavior begins to change and everything reader’s thought they knew is called into question. 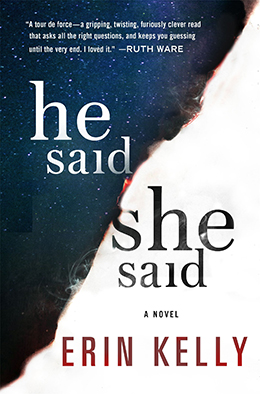 He Said/She Said by Erin Kelly

Told via a very complex and shifting timeline, much of He Said/She Said takes place in the present day, when Kit and Laura are living off the grid (and that is putting it mildly), working to put the memories of that Cornwall trip behind them. In a clever bit of plot construction, Erin Kelly manages to separate all the major players in the novel, so that everyone is isolated and must rely on their own wits in order to prevent total catastrophe.

Because of this complex structure, the first few chapters – until the first flashback – will be a bit confusing for readers. This is intentional and perseverance will be rewarded with a virtuoso display of twist upon twist. Chapters come from the point of view of Kit and from that of Laura – just one of the multiple meanings of the title, He Said/She Said. The way in which Erin Kelly is able to give voice to these two distinct characters is a pleasure to behold – and proves that writing across gender lines is a skill, not an impossibility.

In particular, it should be pointed out that in developing Laura on the page and giving her a believable anxiety disorder resulting from her trauma, Erin Kelly does a wonderful job of documenting this mental illness and how it manifests for people. There will be moments when the reader themselves may breakout in sweats, unwilling to turn to the next page.

None of this would matter if Erin Kelly was not able to bring everything to a satisfying conclusion. With so many knives in the air at once, it would have been easy enough to drop one and He Said/She Said would have fallen apart. Fortunately, endings have never been a problem for Erin Kelly and everything about the way this novel resolves itself rings true for both the readers and for the characters.

For fans of psychological suspense, He Said/She Said is sure to be one of the most successful books of the year.