Erin Kelly’s third stand-alone novel, The Burning Air, will continue to cement her status as a writer known for her complex psychological novels in which discord in the past threatens the equilibrium of the present.

The Burning Air focuses on one family as they are forced to fend off personal attacks from external forces while dealing with the unfortunate death of the matriarch.

The death of a mother is enough to send any family into turmoil.  But in the case of the MacBrides, each family member also has other traumas that make the passing of Lydia MacBride simply the latest strain on the family bonds.

Sophie previously suffered from serious postpartum depression and has just recently discovered her husband Will’s infidelity during her current pregnancy.  Her brother, Felix is afflicted with a facial scar that makes societal interaction difficult; however, in his new girlfriend Kerry, he has found a kindred spirit who seems to understand him on a deeper level.  Their sibling, Tara seems to be handling things the best.  She has a great relationship with her boyfriend, Matt, who has quickly become a perfect father figure for her bi-racial son, Jake.  Even the patriarch of the family, Rowan, who seemed stable, now has taken to drinking excessively to dull the pain of losing his beloved wife.

As these players come together at the family farm, Far North, to scatter Lydia’s ashes events converge to uncover long-buried secrets and shake the foundation of family loyalty.

Erin Kelly has done a beautiful job of structuring this novel.  The first quarter of the book is from Sophie’s perspective and introduces the members of the family as readers watch them gather at the farm.  Just as things take a dramatic turn, perspective shifts and the next half of the book switches to Darcy Kellaway’s point of view as the story flashes back so readers learn his history with the MacBride family and how that interaction is going to lead to future conflict.  Then the final section of the book comes in the form of multiple viewpoints as events on the farm hit a crescendo and conspiracies are revealed.

Using imagery and symbols that harken back to the novel’s title, Erin Kelly fills the story with descriptions of burning and ashes, just as the secrets lurk below the surface waiting to erupt.  There are bonfires, blowtorches and fire festivals, all adding ambiance to the novel. 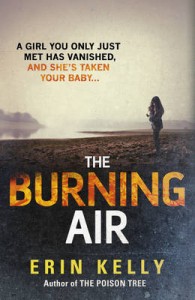 At every turn in the story, readers can feel how the secrets continue to fester.  Regardless of what anyone does, the truth is going to come out.  The lesson is that the truth really depends on one’s perspective of the events.  Different people in the same situation can (and will) have different versions of the truth.  In the end, the real truth is always skewed by the truth-teller.  One should also never underestimate the lengths family will go to in order to protect their own.

With The Burning Air, Erin Kelly has written a masterful psychological thriller with multiple twists that never seem unbelievable or fabricated.