Denise Mina’s The Long Drop is a unique book in the crime fiction genre. Not quite true crime, but also not a fictional tale, The Long Drop is somewhat similar to the method Truman Capote used with In Cold Blood – fiction inspired by actual events. However you classify it, The Long Drop is a well-written account of both a diabolical criminal and some of the oddities within his story.

Told largely in alternation sections, the chapters leading up to the court case and the eventual trial itself are rooted in authentic accounts from the time. Certainly there is still the element of dramatization in these moments, but much of this is verifiable from court transcripts. The chapters where William Watt and Peter Manuel spend a long evening bar-hopping and chatting – not to mention the much more complex interaction between the two men during that night journey – is an imagined version of a meeting that did actually occur. 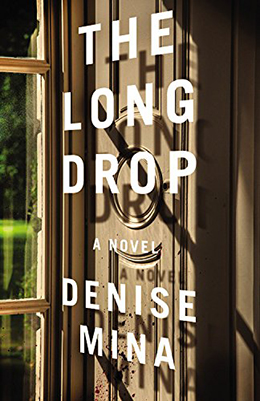 The Long Drop by Denise Mina

William Watt’s wife, daughter, and sister-in-law were killed. Glasgow police found him to be a credible suspect and Watt was ultimately booked for the crime. Eventually, upon release, he began his own investigation and solicits information from the public, a move that pulls Peter Manuel into his orbit. Events transpire to place Watt and Manuel on the above-mentioned odd outing – drinking far too much at too many bars – where Watt hopes to encourage a confession. Who is manipulating whom in this scenario is part of the deep exploration of that evening and readers will find themselves easily strung along by Denise Mina’s hypnotic prose.

There is a methodical method to Denise Mina’s telling of this story. Because the crime itself was committed in the past and readers have a varying sense of how this case resolved itself, the tension is built from the clash of these two minds. This is a slow-boil of a thriller and yet readers will without a doubt feel the tug of forward momentum while reading The Long Drop. The book is relatively short (around 250 pages), so many readers will finish this in just a few sittings – and this is how the book is best consumed.

Denise Mina has always been a writer with a firm grasp of setting. Here she draws readers into Glasgow, Scotland of the 1950’s – a gloomy place indeed. By treating the characterization of that city in the same way she treats that of her two main characters, Mina creates an entangled web in which the removal of any piece would result in a collapse of the entire novel. This is a very specific crime of that moment, in that location, with those participants. There is an inevitability which is hard to put into words, but which the reader feels the longer they remain immersed in The Long Drop.

Easily a highlight of the crime fiction output so far this year, The Long Drop, like most of Denise Mina’s writing, will appeal to a wide variety of readers not just those devoted to the crime genre. This particular novel is especially recommended for fans of true crime television shows like 48 Hours and Dateline and those who enjoy podcasts like Serial and S-Town.