The married writing duo of Nicci Gerrard and Sean French, publishing under the pseudonym Nicci French, have written many books together including the Frieda Klein mystery series.  The first book in that series is called Blue Monday and was released in the US in 2012. 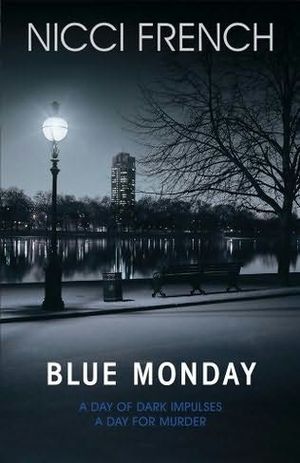 Blue Monday begins with a prologue from the past, in which two sisters are walking to a candy shop.  The older sister becomes impatient and distracted, enough so that in just moments she loses track of her younger sibling.

Flash-forward to present day London, where readers are introduced to psychotherapist Frieda Klein.  Frieda is a professional woman who is good at her job, yet it does take a toll on her.  Her personal relationships are affected and she often finds herself walking at odd hours to combat her insomnia.  When one of her colleagues becomes indisposed, she is reluctantly persuaded to take on his newest client.

Alan Dekker agrees to see a therapist at the suggestion of his wife Carrie.  While Carrie does not really know what is troubling Alan, she certainly knows that things are not “right.”  Alan, on the other hand, knows what he is feeling, just not how to deal with it.  In confidence to Frieda he reveals that he wants nothing more from life than to have a child of his own – a red-headed, freckled son – and that he and Carrie have been struggling with fertility issues for a while now.  Frieda explains how normal this situation is and begins to work with Alan to try to understand him better.

Things get really complicated when Frieda sees a newscast about a local boy who has been kidnapped.  A boy that looks an awful lot like Alan’s dream-child.  Could Alan be responsible for the abduction of Matthew Farraday?  And more importantly, does the patient/client privilege extend to cases where someone merely mentions wanting a child, but then that statement coincides with an actual crime of a similar nature?

Needless to say, this current case will have ties to the earlier missing child case described at the beginning of the novel.   However, I suspect that few readers will see the various twists in this plot before they happen on the page.

Nicci French has created a wonderful and complex character in Frieda Klein.  It is easy for the reader to root for Frieda, even as they see evidence of her flaws.  This is what makes her so human and relatable.  The author then surrounds Frieda with other fascinating characters that are bound to complicate things, not just in this book, but in future storylines yet to come.

The solution to the mystery within Blue Monday relies on an interesting, yet no doubt controversial, topic within the neuroscience community.  Nicci French is able to explain this in layman terms and thus the reader is easily swayed to the possibility presented.  Those who find themselves questioning the validity of psychotherapy and experimental

topics in neuroscience may need to suspend their disbelief, but this reader was fully convinced that what Nicci French was presenting was not only possibly, but likely probable.

Since the case presented in Blue Monday does cause Frieda Klein to interact with the local police, it will be interesting to see how that dynamic is handled in future volumes of the series.  The second book, Tuesday’s Gone, was recently released here in the States and the third book, Waiting on Wednesday, is out in the UK.  Based on the quality of this first entry in the series, I suspect that Frieda will easily be around for the rest of the week.