The Skeleton Paints a Picture – The BOLO Books Review

Our favorite bag of bones, Sid the Skeleton (and his creator, Leigh Perry), have found a new home with Diversion Books and by all accounts it seems that the change of venue has managed to breathe new life into this delightful paranormal cozy mystery series – The Skeleton Paints a Picture is the best book in the series to date.

Georgia Thackery has a new job teaching English at the Falstone College of Art and Design in Massachusetts. Leigh Perry uses this temporary job as a way to remove Georgia from her comfort zone – she has left her family and friends, the schooling here is focused on the arts, and she is unfamiliar with her surroundings. So, when Sid mails himself to her bungalow in a nondescript cardboard box, she couldn’t be more thrilled to have her good buddy – and trouble-making sidekick – with her once again. 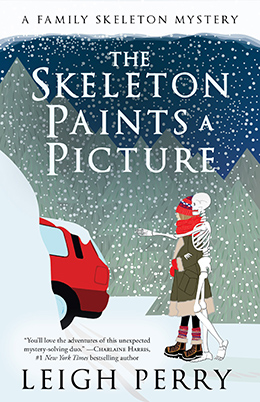 I guess it is worth mentioning to those new to the series that Sid is an ambulatory skeleton who has the ability to talk to and interact with those around him. He has been with the Thackery family for years and the reasons for this can be explored in the earlier books in the series (see: A Skeleton in the Family). However, The Skeleton Paints a Picture is so well written that new readers will feel completely comfortable in this universe. Unlike many paranormal novels, other than accepting that Sid can actually exist, the rest of the book – including the sleuthing elements – are all real-world based.

This unlikely detective team starts doing their usual snooping after Sid accidentally stumbles upon the scene of a car accident and the body of one of Georgia’s colleagues at FAD. As one might expect given the title of the book and the setting in a design school, the mystery at the core of the novel revolves around art, but it is the relationship between Sid and Georgia that is the real highlight. Rather than repeating things from earlier books, Leigh Perry allows the interaction between these two to evolve, as happens in real life. Their snarky and combative banter belies the true tenderness and care that exists in the hearts of these two characters.

Despite being every bit the cozy novel, Leigh Perry gently pushes against the artificial boundaries bestowed upon that subgenre. The Skeleton Paints a Picture features nothing that will offend but it also doesn’t downplay the complexity of humanity and the world in which we reside. As the canvas for this series continues to expand, readers are sure to learn a little something while they are being entertained by this one-of-a-kind duo.

By the time they reach the end of The Skeleton Paints a Picture, readers will be more than ready for the next great adventure in Sid and Georgia’s journey.

Buy Links: The Skeleton Paints a Picture by Leigh Perry

Disclaimer: A digital galley of this title was provided to BOLO Books by the publisher. No review was promised and the above is an unbiased review of the novel.