The Woman in the Window – The BOLO Books Review

Contrary to popular belief, it is possible to over-hype something. Take for example, A. J. Finn’s The Woman in the Window. This is a solidly-written debut novel that will please most psychological suspense readers, but the pre-pub buzz wants to make it out to be this ground-breaking example of this popular sub-genre. Truthfully, there is little “new” here, but that does not mean it is not worth your time. The Woman in the Window will be a bestseller, with readers from all walks of life, simply because it is an entertaining book – it doesn’t need to reinvent the wheel.

The Woman in the Window is the story of Dr. Anna Fox, an agoraphobic child psychologist, who spends much of her day watching through her windows as her neighbors interact in the outside world. When a new family moves in next door, she becomes fascinated with them – a situation that is only exacerbated when she witnesses what she thinks may have been a murder within their home. 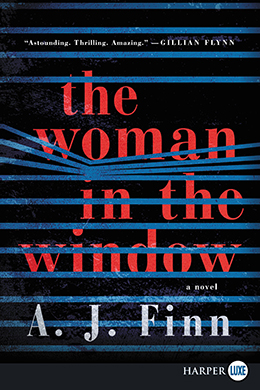 Since Anna suffers from her own tragic past, she has a tough time convincing anyone of what she saw – not her estranged husband, not her doctor, her downstairs boarder, her exercise coach, eventually, not even the police. If Anna is going to figure out what she witnessed, she is going to have to find a new level of strength within herself – before it is too late.

Along with daily phone calls to her husband and daughter, Anna also connects with the outside world via the Internet. Taking part in an online support group for other agoraphobics, Anna manages to implement her knowledge of psychology to help others – even as she struggles to heal herself.

Make no mistake about it, A. J. Finn can write. The Woman in the Window is written in a very accessible style that immediately grabs the reader and refuses to release its grip until the end. There are plenty of complications within the plot; some certain to shock and surprise. Devotees of domestic suspense will likely predict some of the twists before they occur, but because they feel organic to the narrative, readers will never feel cheated.

Revelations in both the story of what put Anna into her agoraphobic spell and the mystery of what happened in the neighbor’s house are well timed, making The Woman in the Window one of those books that demands to be read as quickly as possible. Hitchcockian is a word that will often be referred to in reviews of this novel – obviously because the plot harkens back to Rear Window – but it also happens to be an effective way of highlighting the importance of pacing within this tale. The novel unfolds like a puzzle, with some obvious pieces missing (or overlooked) until that crucial climax. The Woman in the Window is very cinematic, so of course it is no surprise that a film is already in the works.

As a debut, The Woman in the Window welcomes a new writing talent. It is best enjoyed with as little foreknowledge as possible – which is why this review mentions very little in terms of plot. Don’t buy into the hype, but do read it based on its actual merits – namely being a clever psychological suspense novel perfect for a leisurely afternoon by the fireplace.

Buy Links: The Woman in the Window by A. J. Finn