Hanna is cold and cruel and creepy. Hanna is manipulative and will get what she wants no matter the cost. Hanna is a villain who will lodge in the reader’s mind for a very long time, becoming both legend and archetype. Hanna also happens to be seven years old. Readers will meet Hanna in Zoje Stage’s Baby Teeth; afterwards they will carry Hanna in the darkest recesses of their mind, the place where their deepest fears reside – the place they dare not think about too often.

In Baby Teeth, Suzette and Alex Jensen are the parents of young Hanna, and like all families, they are dealing with the demands and decisions that raising a child bring forth. Hanna has yet to speak a word and all the experts are saying that this is a choice, rather than some type of physical ailment that would prevent speech. Hanna’s acting out has caused her to be thrown out of enough schools that the Jensen’s feel home-schooling is the only option. Since Alex’s career is supporting the family at the moment, the job of teaching Hanna has fallen to Suzette. 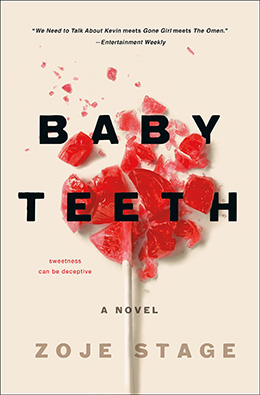 In an effort to terrorize her mother, Hanna begins to speak only when she and Suzette are alone together. She says things like “I’m not Hanna, I am a witch named Marie-Anne Dufosset” and it is clear that her intentions are evil. Alex, who has never heard Hanna say a word, doubts his wife’s account of their daily interactions. Despite Suzette wanting to get a clinical psychologist involved, Alex is reluctant to traumatize his beloved daughter with further examination.

Meanwhile, Suzette’s history is far from pleasant. She has suffered from several gastro-intestinal disorders for her entire life, ultimately being diagnosed with Crohn’s disease. The stress of this home-life situation has only exacerbating her condition. The depictions of Suzette’s health struggles feels so authentic that readers can’t help but sympathize with her situation and hope for some relief. Suzette is granted a glimmer of hope when she talks with Dr. Beatrix Yamamoto. Finally, it seems that someone might believe her.

This simple set-up draws readers in to the warped world of Hanna Jensen. Zoje Stage crafts characters readers can relate to, places them in situation that would anger any of us, and pulls no punches when in comes to the vicious intent of this young villain. Mind you, Hanna’s parents are not the easiest folks to like, with both of them having enough flaws of their own. There are times when Hanna seems just a bit too precocious, seemingly acting out of character for a seven-year-old, but readers with children are still cautioned about this book – you may find yourself locking the little ones into their bedrooms each night after you witness Hanna’s antics.

In all seriousness, Zoje Stage has created a new type of antagonist. There will be moments when the average reader will feel their blood boil to the point that if Hanna were in the room, all bets would be off. Is Hanna really possessed, inherently evil, or just a manipulative brat? After all, one of the things that makes Hanna so scary is that she herself doesn’t think of her behavior as odd or unwarranted. Ultimately, goodness is subjective and environmental; Baby Teeth reveals that we can often be both the hero and the villain in our own story. Prepare to be terrorized!