In Her Bones – The BOLO Books Review

The reading public’s interest in psychological suspense shows no sign of diminishing. In Her Bones is Kate Moretti’s third book in this genre and yet, each of these stand-alones is distinctly different. Unifying them all is an easily-readable writing style and a gift for plotting complex tales in which character is the focus.

In Her Bones tells the story of Edie Beckett, the daughter of notorious serial killer, Lilith Wade. Fifteen years after those crimes, Edie is still haunted by her mother’s crimes and finds herself drawn to the families of the victims. 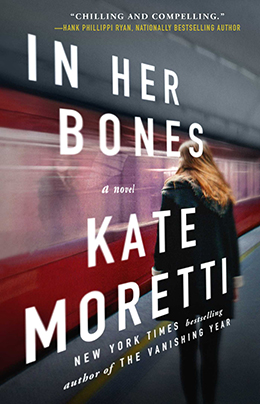 Given the nature of the narrative structure, psychological suspense novels often have very complex character development and Moretti’s new book is no exception. For some readers, this makes these lead characters more challenging. There is no question that Edie is a difficult character to “like,” but it is precisely because of her poor choices that In Her Bones is able to unspool with constant surprise. Given her peculiar history, Edie’s troubled life is perfectly understandable and given enough time, readers will feel responsive towards her.

Edie’s infatuation with the relatives left in the wake of her mother’s murderous spree leads her directly into her own nightmare. When a man is murdered and Edie becomes the prime suspect, she must go on the run and evade capture until she can remember exactly what happened on the night in question. Hopefully for Edie, that means figuring out who the real killer is – assuming it’s not herself.

Kate Moretti gives readers the other side of things via point of view chapters from Gil Brandt – the detective who arrested Edie’s mother and the man hunting Edie down now. Gil’s history with the family makes for an interesting way to expose readers to more of the backstory while never losing sight of the current cat and mouse game.

One other element weaves its way through In Her Bones. Occasionally readers get excepts from a true-crime book that was written about Lilith’s case. These chapters are incredibly well-written and many readers will find them their favorite part of this story. But they are also integral to the structure of this overall novel and fans of Moretti will know that nothing is included simply to fill pages.

Despite a prickly lead character, Kate Moretti’s In Her Bones will please readers looking for psychologically-astute explorations of criminal behavior and its aftermath.

Buy Links: In Her Bones by Kate Moretti

Disclaimer: A print galley of this title was provided to BOLO Books by the publisher, however, this review is based on the audio-book version of the novel. No review was promised and the above is an unbiased review of the novel.