As you struggle to complete those last minute holiday shopping trips, let’s take a look at a few books from smaller presses this week. We have a “cozy,” a LGBTQ+ based YA title, and a traditional mystery in an nontraditional locale. 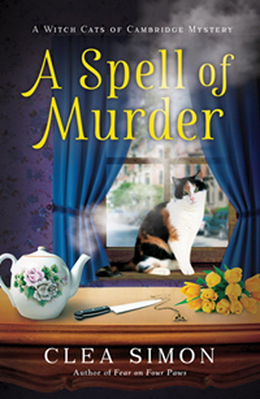 If you are reading a Clea Simon book, you know it’s not going to be stodgy and traditional in any way. That applies to this series launch as well. While technically a cozy, Simon never shies away from the edgier-side of the coin. As a cat-lover, Clea Simon has a knack for convincingly depicting the thoughts of our feline friends while blending in the paranormal in ways that might convert in the most skeptical of readers. Plenty of plot is unspooled, sure to be expanded upon in future books in the series.

“It’s Harriet’s fault. It’s always her fault, not that she’ll ever admit it.” So begins A Spell of Murder: A Witch Cats of Cambridge mystery, the first in a new cozy series that mixes feline fiction with a touch of the paranormal, and a little romance as well.

Becca, newly single and newly unemployed, wants to believe she has psychic powers. With nothing but time – and a desire for empowerment – she’s studying to become a witch. What she doesn’t know is that her three cats – Harriet, Laurel, and Clara – are the ones with the real power. And when Harriet – “a cream-colored longhair with more fur than commonsense” – conjures a pillow for her own comfort, Becca believes her spells are finally working. Could that be why Trent, the coven’s devilishly handsome leader, has been showing her special attention? Or why Suzanne, a longtime coven member, draws her aside to share a secret – a confidence that may lead to murder? 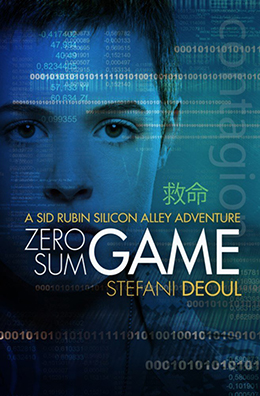 Sidonie Rubin returns in Stefani Deoul’s second YA novel. Readers who fell in love with Sid in her first outing (On the Larp), will cement that relationship in Zero Sum Game. Sid is back with her unique cadre of friends for yet another technological thrill ride. Deoul never talks down to her audience, especially when in the techo-realm of things – but it is the heart and soul of her characters that will truly capture readers. Populated with much diversity, this series is perfect for our newest generation of “woke” teens.

Zero Sum Game finds our high-flying lesbionic brainiac Sid Rubin and her unlikely posse of friends grounded, with wings clipped from their live-action-role playing misadventures. To break out of parental jail, Sid, Jimmy, Imani, Ari and Vikram enter a school robotics competition. But just as things get interesting, Vik learns that his super-star status and hard-won trophies from the frantic online game Contagion have been stolen. “Faut pas toucher mes amis. You do not mess with my friends.” Watching Vik fall apart, Sid is determined to track down the trophy thief, no matter how much late-night gaming and sleuthing it takes. Sid and the gang join newcomer Ze to chase ghosts and trawl dungeons in a frenzied race against time to not just save Vik’s bevy of stolen gaming goods, but also the life of a teenage gamer held hostage. 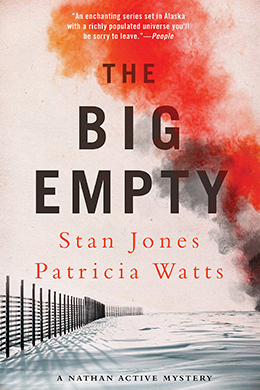 I haven’t read this one yet, but the Alaskan setting, the complex central relationship, and the promise of many motives certainly has be intrigued enough to include it here.

Police Chief Nathan Active investigates a plane crash out in Alaska’s Big Empty—and what he finds there casts suspicion of murder on several locals in his small town of Chukchi.

Evie Kavoonah, a young mother-to-be, and her fiancé, Dr. Todd Brenner, are on a flight over the Brooks Range when their bush plane runs out of gas and hits a ridge, instantly killing them both. Chukchi police chief Nathan Active doubts he’ll find anything amiss when his close friend, Cowboy Decker, asks him to look into the possibility of foul play. Evie was like a daughter to Cowboy, who trained her to fly, and he insists there’s no way his protégée made a fatal mistake that day. Nathan reluctantly plays along and discovers that Cowboy’s instincts are correct—the malfunction that led to the crash was carefully planned, and several people in the village have motives for targeting the pair.

Meanwhile, Nathan’s wife, Gracie, is pregnant, but so scarred by memories of domestic abuse that she isn’t sure she should have the baby. Nathan must support her and their adopted daughter, Nita, while managing an increasingly complex and dangerous murder case