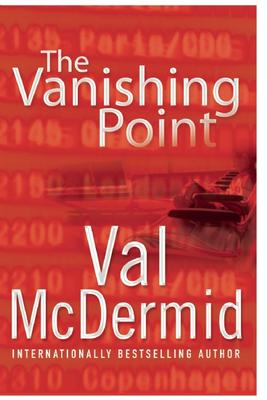 Val McDermid is probably best known for her series of novels featuring criminal profiler Tony Hill and DCI Carol Jordan, which was adapted into the television series, Wire in the Blood. For a number of years now, however, she has alternated the series books with a collection of stellar stand-alone mysteries. And it is these stand-alones which allow her the freedom to explore themes that don’t necessarily fit into the procedural format of the series books.

In The Vanishing Point, Val McDermid turns her keen eye for observation on reality television and the nature of celebrity. The two main protagonists are Stephanie Harker, a ghostwriter of celebrity biographies and Scarlett Higgins, whose claim to fame is a major meltdown on a popular reality TV show. It is probably no accident that these two ladies share the same initials.  By bringing these two characters together, McDermid points out how difficult it can be to really know another person.

The novel opens with Stephanie at the airport security check, chaperoning a little boy named Jimmy. As she is pulled out of the TSA line for closer inspection, she is startled to see the boy led away from the conveyor belt by a stranger. Her inability to reach him in time begins the central mystery of the book. Who was the boy and who took him?

As with most of the best-written mysteries, however, it is the route to the solution that serves to highlight the more subtle themes of the story.

The reader quickly finds out that for some time now, Stephanie has been working with Scarlett Higgins in an effort to rehabilitate Scarlett’s image after an infamous scandal that was broadcast on national television. This ghostwriting job has brought Stephanie into directly contact with various people in the entertainment industry, both honest and unsavory. As the police question her, the reader begins to feel that Stephanie’s past may be catching up with her.

Few authors are as successful at blending flashbacks so seamlessly into their stories as is Val McDermid. She is a master at plot construction and shows it to full effect in The Vanishing Point. The structure of the story requires Stephanie to relate past events to the police officer in charge of the investigation. In doing so, the reader is swept back to these moments for extended periods of time. This technique is so central to the construction of the novel that it seems as though at least fifty percent of the book is flashback. It is a true test of McDermid’s talent as a writer that she is able to maintain the ever-increasing suspense throughout. The reader is constantly aware of the danger that Jimmy is in, even as we hear seemingly unconnected details about Stephanie’s life and career.

Faithful readers of McDermid’s work will be delighted to find the return of some favorite characters from a previous novel (Trick of the Dark), but knowledge of them is not at all required to appreciate the current book. In fact, The Vanishing Point would be a perfect introductory novel to the works of Val McDermid.