In 1994, Nicholas Barclay, age 13, disappeared from his hometown in Texas.  In 1997, he reappeared in Spain.  In 2012, Bart Layton created a documentary feature film that

tells this unbelievable story.  A story that reinforces the old adage that “Truth is Stranger than Fiction.”

As implied by the title of the documentary, the Nicholas that turns up in Spain three years after his sudden disappearance is nothing more than an imposter.  And yet, he was able to fool not only the foreign authorities and the FBI, but also the Barclay family as well.  Or did he?

Interviews with the family members as they describe meeting Nicholas again after their separation are completely riveting.  The viewer can only imagine what this normal, working-class family must have been feeling at this reunion.

However, the movie is also the story of Frederic Bourdin, a man wanted by Interpol for an astounding number of false identities; and of Charlie Parker, the private investigator who still today wants answers that he may never find.  While at the heart of it all is the unsolved 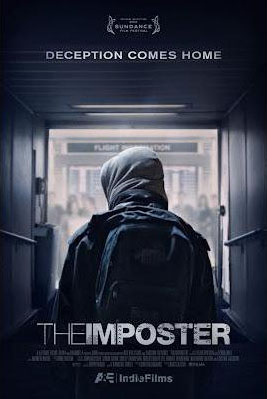 disappearance of a young boy and a family that longs for his return.

Bart Layton uses feature film techniques, such as voice-over, special effects, and cinematography to convene this story to the audience.  And in doing so, he is able to manipulate the viewer into having shifting loyalties in a story that would seem to be very cut and dried.  While this movie is clearly a documentary, it plays out like the most exciting of suspense thrillers.  The viewer is simply unable to look away, even as what they are seeing and hearing seems completely unbelievable.

This is just one of several documentaries that was over-looked during the recent Academy Award nominations.  Please don’t let that prevent you from seeing this incredible film.  You will not believe that in our modern day, with all the identification technology we have, something like this can still happen.  And this is the story of how.

The Imposter is now available on DVD.