To say that I am excited to be joined today by the one and only Catriona McPherson would be vastly understating it.  She is a true delight and her sense of humor shines through in everything she does.  Needless to say, she also writes a killer book.   Please help me welcome Catriona to BOLOBooks.

Scheduling Update:  Please return to the blog tomorrow for the BOLOBooks review of Catriona’s latest novel, As She Left It.

BOLOBooks:  As She Left It is your first stand-alone novel.  How was the writing of this different from your series books?  Are their unique problems associated with each style?  Do you think you will return to the stand-alone format again in the future?

Catriona McPherson:  To start at the end – absolutely!  I’ve already finished the second book in this new strand of stand-alones – The Day She Died – and it’ll be out with Midnight Ink next summer.

It was both a challenge and a relief to write this instead of my historical series.  Actually, I didn’t realise how well I’d got to know my recurring characters and their world until suddenly it was all gone and I was asking a shy stranger: what’s your middle name? when’s your birthday? what do you get on your pizza?  BUT – and it’s a huge but – once I’d answered those questions I didn’t have to work out if that was a plausible middle name in 2010 or if anchovies were freely available in that city at the time.  Contemporary stories are, in this one respect, much easier.

BOLOBooks:  Opal Jones is twenty-five at the time of the main action of As She Left It, but in many ways, she has been through more than people twice her age.  Did you intended to write a novel with such a strong young heroine, or did Opal grow out of the needs of the story?

Catriona McPherson:  Opal had to be about the age she is for the story to work out and she was always going to have gone through what she’s been through (story again).  Her response to the challenges in her life, though?  That was born out of whatever fairy-dust it is that gets sprinkled around as you start writing.  I’m not a planner (HINT: planners don’t talk much about fairy-dust) so it was a surprise and a delight to see how very kick-ass Opal turned out to be, as I worked through the first draft. I really am fond of her now.

BOLOBooks:  Secrets play a huge part in As She Left It.  Even when kept for good reasons, secrets eat away at us and erode our trust in others.  What is it about Opal that makes people open up to her?

Catriona McPherson:  That’s a great question.  You’re right that the secrets people are keeping on Mote Street are gnawing at them.  And it just so happens that, when Opal arrives back there, it’s at a pressure-cooker moment when something’s got to give.  What makes them turn to Opal, though?  Well, the old neighbours she re-meets are people who only knew her as a child – and a child in a pretty dysfunctional family at that.  So she’s not someone they think could ever be looking down her nose at them or judging them.  She accepts people, warts and all.

BOLOBooks:  One of the clues that set Opal on her search is found in an antique store.  Are you a fan of antique stores?  What do you think makes them the perfect place to begin a mystery? 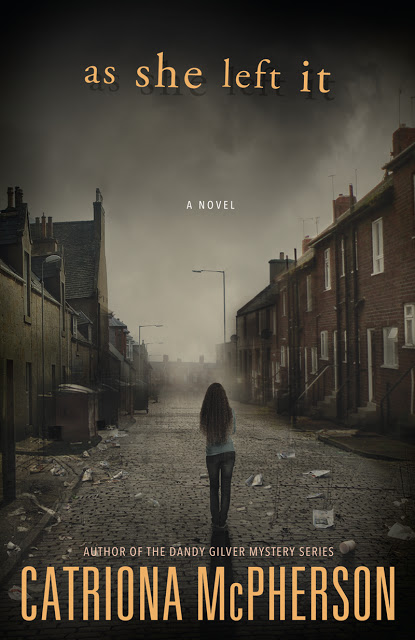 Catriona McPherson:  Hah! I love antiques, vintage, second-hand, thrift store/charity shop and dumpster-dived stuff.  It’s a mark of failure if I have to buy anything new from a proper shop.  (The only piece of furniture in my house got that way is a long, king-size, Ikea bed my dad insisted we buy for him and my mum to sleep in on their month-long visits; we had a perfectly good 1930s, walnut-veneer, double spare bed with a footboard but it got a strong no.)  Otherwise everything – washing machine to salt shaker – is pre-loved.

Antiques are made for mysteries, don’t you think?  Old letters falling out of books; bloodstains under the cushions on old couches (yuk, though); family names and ages and heights all scratched onto the backs of old wardrobes – but who are these people? – why are there no records of them?

The antique in As She Left It (thank you for your scrupulous avoidance of spoilers, by the way) is based on a real possession of mine, bought for the same unbelievably low price for the same mysterious reason.

BOLOBooks:  I just love the concept of “pre-loved.”  I am going to add that to my vocabulary.  As for spoilers, here at BOLOBooks, I always try to keep my reviews and interviews as spoiler free as is humanly possible.  It’s only fair to the reader.

A thread that runs through As She Left It involves the interactions of this eclectic group of neighbors.  In our age of social media, it seems that we are losing the connectedness with the real people around us.  What do you think of the neighborhoods of today?

Catriona McPherson:  I’ve been very lucky.   I live in the middle of nowhere, up a dirt track, with my mailbox half a mile away where the county road runs out, but my local town – Davis, CA – is an extremely friendly and outgoing place.  It might be the weather: when it’s warm and sunny people pass the time of day.  It only ever takes five minutes for two “strangers” at the farmer’s market to find acquaintances in common.  Very low Bacon-rating in Davis.

The last place I lived in Scotland was even smaller and . . . well, not friendlier (they were all Scottish and usually battling against horizontal rain) but very settled.  Here’s a story to explain the kind of village New Galloway is.  When I first moved there, one day I was walking along the street and a man was coming down a ladder propped against a cottage wall.  I looked into his bucket, hoping he was a window cleaner (I couldn’t reach my new upstairs windows).  He wasn’t; it was putty.  But he asked where I lived and said he’d drop off his long ladder in the garden, leave it for a week and then come and pick it up.  I never found out his name, but I got clean windows.

The hub of New Galloway was “Marie in the shop”.  If Marie in the shop knew you were watching your weight and you tried to buy cookies/biscuits, she’d skewer you with a look and ask if you had guests coming.  The first time I asked if she sold dishwasher tablets she answered “No, we bloody don’t – get your hands in the sink and don’t be so lazy.”  I didn’t have to try hard to conjure up the Mote Street neighbours really!

BOLOBooks:  As She Left It is a combination of coming-of-age story and traditional mystery.  It is almost impossible to separate these two elements within the book.  Did you work from an outline or did you just unleash the story and follow where it led you?

Catriona McPherson:  Outline?  You’re having a laugh.  I knew what Opal’s back story was and I thought I knew the solutions to the three main mysteries she sets out to solve.  Apart from that I was just trotting along behind the characters with my lap-top, recording what happened.  But for any beginning writers out there, I need to add a warning to that.  It always sounds so lovely and carefree when non-outlining, “pantser” writers describe their method.  Here’s the thing: we’re talking about the first draft.  The first draft is, indeed, a party.  The second draft is clearing up after a party.  I’m not evangelical about this method and I do think life would be less upsie-downsie if I knew what I was doing all along, but this is what works for me.  With some weeping.

BOLOBooks:  I think that you really hit the jackpot with the cover design for As She Left It.  Looking at the cover, I really felt like I was on Mote Street with Opal.  How involved were you in the cover decisions and what do you think of the end result?

Catriona McPherson:  Right?  It’s brilliant and nothing to do with me at all – just the genius of the art department at Midnight Ink.  The figure is completely Opal Jones in every way: tentative but sassy, hesitating to plunge in but obviously going to.  If I hadn’t written the book I’d definitely read it – no way could I resist following that young woman into that scene.

Also, I was a bit worried about how to describe the look of Mote Street for an US audience.  For a UK audience, all I’d need to say was “Leeds terrace” and, given the close Opal-centric POV, I dreaded working in a explanatory description.  (Imagine a character from New Jersey, say, explaining what a “mid-century ranch” is.)  I would have got there in the end – maybe had Mrs Joshi go on a rant about her house in England compared with her house in India, but the jacket saved me a world of info-dump.

BOLOBooks:  And the handy map at the beginning of the book also helps to clear up the look of this very unique neighborhood layout. 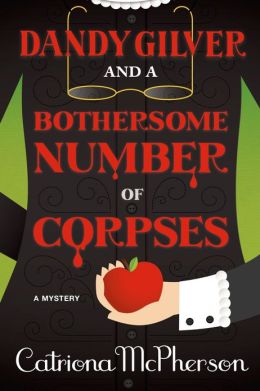 I simply can’t let you go without at least asking about Dandy Gilver, the main character in your long-running series of mysteries.  What is next for Dandy?

Catriona McPherson:  Thank you!  Poor Dandy, pushed back to November to avoid a clash (but thereby going on sale the weekend before Thanksgiving in a very seasonal red and green cover).  And after she just won me the Agatha too.  Dandy is alive and well and in all sorts of trouble with vanishing schoolmistresses in A Bothersome Number of Corpses.  Then she’ll be in hot water at a hydropathic spa in the Scottish lowlands in A Deadly Measure of Brimstone and right now, as I type this in San Francisco airport on my way to Book Expo America, I’ve got 300 pages of the new one to edit on the flight to New York.  It’s set in a fishing village and the working title is A Regrettable Kettle of Herring, but we’ll see.

BOLOBooks:  I just have to say that the Dandy Gilver books have some the best titles in the business.  And the newer jacket designs are so unique, eye-catching and easily identifiable. 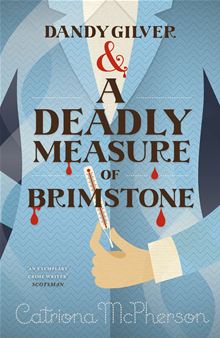 Catriona McPherson:  I’m massively not a gadget person.  I don’t have a microwave, tumbledrier or coffeemaker.  So I think I should be left off all the graphs about e-reader use; I’d only skew them.  Trade paperback would be my choice if I had to pick just one.  Trade, hardback, mass-market, scroll, stone tablet, e-reader in that order.

It’s been lovely to talk to you and thank you for such interesting questions; I’ve really enjoyed answering them.