On Sunday July 14, news broke that The Cuckoo’s Calling, the debut novel by Robert Galbraith was actually written by J K Rowling.  Since J K Rowling was using this pseudonym in order to garner honest reviews of the novel, rather than reviews weighted with the baggage attached to the Rowling name, I have elected to honor her wishes and review this book as though it were a debut novel.

The Cuckoo’s Calling, by Robert Galbraith, is the most traditional of mystery novels.  Featuring a private investigator working a case in which all of the witness statements do not add up, it follows a long line of similar storylines from the genre’s history.  What makes The Cuckoo’s Calling very much of the moment, however, is its focus on celebrity culture and the downside of stardom. 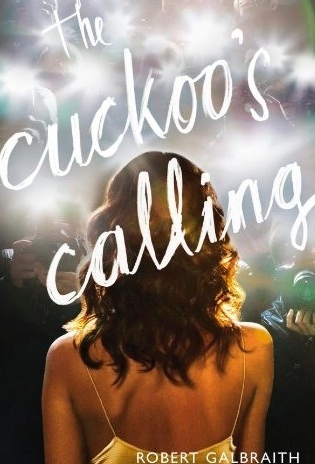 The Cuckoo’s Calling by Robert Galbraith

As the novel begins, our main character Cormoran Strike is struggling to keep his private detective agency up and running.  After firing his most recent secretary, he finds himself with a new employee from the temp agency even though he never asked for a replacement.  Before he can figure out how to handle this however, a huge case falls into his lap.  John Bristow wants to hire Strike to investigate the death of his sister, celebrity super-model Lula Landry.  Lula’s death a few months prior has been ruled a suicide, but John knows that his sister would never have jumped from her apartment balcony of her own volition and he wants Strike to prove it.

Robin Ellacott, Strike’s new temp, has always dreamed of working at a detective firm, so she immediately begins to pitch in and help with the investigation, forging the beginnings of this tentative partnership.  The true strength of this debut novel comes from the fully realized characters that Galbraith has created as his leads.  Both Cormoran Strike and Robin Ellacott come to the table with credible and complex back stories which immediately endear the reader to each of them.

The wealth of fascinating people does not halt with the main characters though.  The victim in this case, Lula Landry, is both bi-racial and adopted.  This makes her quite an interesting persona, yet she remains easily relatable to any of a number of modern celebrities who have repeatedly found themselves in hot water.  Meanwhile, populating the suspect pool are such unique individuals as Guy Somé, a flamboyant fashion designer who claimed Lula as his muse, Rochelle Onifade, a pink fur-wearing friend of Lula’s from the wrong side of the tracks, and Deeby Macc, the rapper who may have written one too many lyrics about the beauty that is Lula Landry.  It is these types of characters that make the repeated scenes of Strike interrogating witness after witness supportable.  In the hands of a lesser author, these scenes could easily have become tedious, but because Galbraith imbues each supporting character with distinctive traits, readers are interested in hearing what they have to say – not only as it relates to the case, but also as it relates to the world of fame and notoriety. 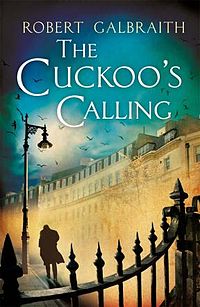 The novel also includes some subtle use of metaphor which will make English majors cheer.  Strike is a war veteran who lost one of his legs in Afghanistan.  As he proceeds to investigate the Lula Landry case, his prosthetic leg continually gives him problems, rubbing raw the skin it attaches to.  It is not a stretch to relate this to the minor irritations each of the interviews create in Strike’s mind.  Something is not adding up in the stories these folks are telling.  Another recurring metaphor related to Strike’s military past is the idea that paparazzi attacks on celebrities are not unlike war-zone ambushes, reinforcing the idea that being hunted is never pleasant.

Robert Galbraith chooses to end The Cuckoo’s Calling is the same type of tradition which forms the backbone of the novel.   Strike maneuvers his main suspect into a room and then proceeds to reveal in detail the clues that led him to the discovery of culpability.   Modern readers may find this ending too neat and perfect, but again, it does harken back to those mysteries of old.  Anyway one looks at it, The Cuckoo’s Calling has much to over to fan of the genre and many will be waiting for the next case to be tackled by Strike and Robin.