It would not be a stretch to assume that most fans of crime fiction appreciate the sense of justice found in many of the genre novels.  There is something eminently satisfying in witnessing the “wrong-doer” being exposed and punished.  Readers are used to crimes that have clearly evident and understandable motives, so when Steve Mosby turns that trend upside down, it feels incredibly fresh and innovative.  The Murder Code (published in the UK as Dark Room) is the book in question and it has just made its way to American shores.

In The Murder Code, readers will encounter DI Andrew Hicks and his partner Laura Fellowes as they are assigned a new case unlike any they have experience before.  It seems that a serial killer is striking out at victims randomly and as much as DI Hicks wants to find a reason for these killings, this is becoming less and less likely as the killer is sending him letters saying that the cops will never break his code.  Regardless of how many serial killer novels one has read, this one is going to send shivers down the spine.  There is something very scary about killings that have no apparent reason – both DI Hicks and the reader will quickly realize this. 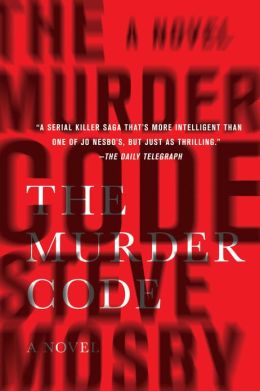 The Murder Code by Steve Mosby

Seamlessly woven into this main mystery are a series of subplots that add both texture and counter-points to the central storyline.  DI Hicks is dealing with relationship issues on the home front.  His pregnant wife and he are in the process of attending couples counseling with no clear reason for their troubles.  There is also the tale of Gregor Levchenko, a candle-maker whose daughter died as a result of a crime several years earlier.  And there are a series of vignettes detailing the interrogation of a young boy who is somehow involved in a shooting.  It all sounds very complicated, but Mosby excels at making it all flow together into a clear and engaging narrative.

The Murder Code is a very graphic novel depicting many violent acts against both humans and animals, so it is not the right choice for those that prefer a more cozy-style mystery.  Nothing depicted is gratuitous because it helps the reader to understand the ramifications of these senseless acts, but it can make for difficult reading at times.

There are many themes that run through The Murder Code and to reveal much here would spoil the various twists and turns that Mosby has planted for the reader.  One topic that should be highlighted however is the idea of the long shadow cast by abuse of all sorts.  Repeatedly the reader must confront various forms of abuse and while each is unique in its own way, a pattern of effects can be seen and is worth noting.  This will without a doubt be something the reader will remember long after finishing the novel.

Mosby’s prose is crisp and compact with shorter chapters causing the reader to keep turning pages.  There is a birthing scene late in the novel which reads like an independent short story – the kind where you have no idea what the outcome is going to be, but you can’t stop reading for want of finding out.  There is more suspense in that one scene than is often found in entire books.  It is writing like that which led to Steve Mosby winning the CWA Dagger in the Library Award in 2012.

The release of The Murder Code is sure to make Steve Mosby a more recognizable name here in the States.  Don’t be surprised if you start seeing The Murder Code pop up on Best Of lists for crime fiction in the near future.