Beyond Belief is the second book in Helen Smith’s delightful Emily Castles mystery series.  Readers are once again entertained by Emily’s investigative escapades and the unique individuals she meets on her journey to uncover the truth.

Just as in the first book in the series (Invitation to Die), Beyond Belief is based around a convention where Emily is present.  In this case, Emily has been asked by her friend Dr. Muriel Crowther to attend the “Belief and Beyond” conference in order to ferret out who (or what) is behind possible threats to illusionist Edmund Zenon.

Not exactly one to embrace the supernatural, Emily is not surprised to find that the conference is attended by individuals on all sides of the argument.  There are those like herself, who take a more scientific approach, those that firmly believe in spirits and ghosts, and those who view everything through the veil of religion.  It is not hard to understand why these various factions clash. 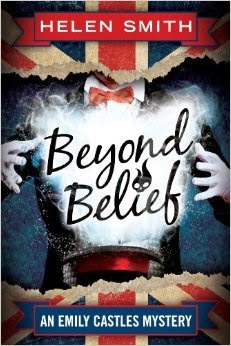 Beyond Belief by Helen Smith

Helen Smith excels at writing comedic situations and there is no shortage of them in this novel.  The quirky characters that populate the “Belief and Beyond” conference will amuse and charm even the most cynical of readers.  That is not to say that there are not deeper issues under the surface – just that Smith makes the wise decision to allow the reader to determine how much time they wish to ruminate on such larger, ephemeral topics.

Perception is one of the most important traits humans possess.  We must be able to enter a new situation and within moments assess both the people and the place.  Some are more successful at this technique than others.  It is Emily’s ability to do this with pinpoint accuracy that quickly endears her to readers.  The mystery at the center of Beyond Belief pivots around perception or the lack thereof.  Everybody believes in something, but often those beliefs are in direct opposition to the beliefs of others.

It is likely no accident that Helen Smith has chosen to set this novel in Torquay.  This location will no doubt cause readers to think of Agatha Christie, since she once called the seaside town home.  A visit to Christie’s house even plays a small part in the novel.  Since Smith is writing very traditional mysteries, harkening back to the days of Dame Christie, this all seems especially appropriate.

It is also interesting to note that the novel does not shy away from the modern.  Helen Smith (who is very active on social media) even gives her central conference setting its own Twitter hashtag (#BELIEFANDBEYOND).

With humor and strong investigative work, Emily Castles is sure to become a fan favorite in the arena of amateur detectives.  And as her creator, Helen Smith is destined to have a long career entertaining readers around the world.   One can only imagine the trouble Emily will find herself in when she next travels to a conference or convention.  If it is as much fun as Beyond Belief was, everyone will come out a winner.

Disclaimer:  A print galley of this title was provided to BOLO Books by the publisher.  No review was promised and the above is an unbiased review of the novel