Sophie Hannah has consistently been writing some of the most complex and psychologically acute mystery novels out there. The Telling Error, the ninth in her bestselling series, continues this tradition. Reading one of her novels is like looking into the private files of a renowned psychologist: you never know what you are going to find, but you know it will be fascinating.

In The Telling Error, Damon Blundy has been killed and the actions of Nicki Clements on the day the body is discovered are sure making her look guilty. When Nicki nonchalantly drives onto Blundy’s street as the police are beginning their investigation, she quickly makes the decision to turn around and take a different route. The police see this as a sign of culpability – but what exactly is Nicki guilty of? 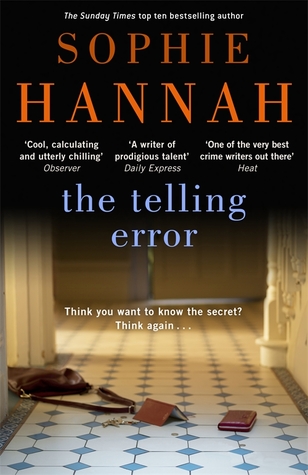 The Telling Error by Sophie Hannah

Damon Blundy was not a nice man. In his capacity as an editorial reporter/gossip columnist, he made it his business to sabotage the lives and careers of others. Behind the mask of his profession, he said and did what he liked without fear of repercussions. Did he ultimately pay for that with his life?

The Telling Error is a book about facades – those masks we wear on a daily basis to turn ourselves into someone we are not. Typically, this defense mechanism is something used to make us better. It can give the shy wall-flower the ability to confidently ask the handsome boy to dance or it can convince our friends that we are happy when we are actually struggling through our most difficult times. But there is also a dark side to these illusions and it is within this realm where Sophie Hannah sets her tale.

It is this capacity to lie – to society, to our family, to ourselves – which provides the accelerant to which Hannah adds the spark. The novel encompasses various forms of deception. One of the major plot points involves the online dating scene – a place where people are notorious for stretching the truth to meet their own needs. Marriages of both major and minor characters reflect various ways in which people attempt to mold their personal lives into some often unattainable ideal. And then there is the world of online comments. This is a place where people feel able to say whatever is on their minds while hidden in the shadows of anonymity. Each of these provides a small portion of the puzzle that will reveal the killer’s true identity.

As with her other series novels, Sophie Hannah also allows the themes of the novel to seep into and highlight elements of her continuing characters’ lives as well. Here, in addition to the usual shenanigans of Charlie Zailer and Simon Waterhouse, Hannah shines a harsh spotlight on Charlie’s sister, Olivia and Olivia’s “relationship” with Gibbs. More revelations on that front have been promised for the next novel in the series.

The way in which Sophie Hannah manages to weave her disparate threads into one larger story is sure to impress and her ability to incorporate real world issues (such as online bullies and sports doping) seamlessly into her novel is quite remarkable. The Telling Error shows us that secrets and lies are rarely a good idea and frequently lead to unexpected outcomes.