Reading can give you access to people and places once thought to be inaccessible.  In the case of Julia Dahl’s debut novel, Invisible City, readers are granted entry to the fascinating world of the ultra-Orthodox Jewish community in Borough Park, Brooklyn.  Invisible City is a mystery novel – of that, there is no question – but it is also an informed glimpse into this insular community which is often misunderstood by secular society.

Invisible City is the story of Rebekah Roberts, a stringer for a tabloid-style newspaper headquartered in New York City.  When Rebekah is assigned to cover the discovery of a women’s body on the property of a local scrap yard, she has no idea that the past she has tried to avoid is about to come crashing back to the forefront.

You see, when Rebekah was just a baby, her mother abandoned her family to return to the religious lifestyle she once rebelled against.  Rebekah’s mother, a Hasidic Jew, hasn’t been heard from since.  Now, occupying the very city where her mother may be living, Rebekah finds herself entwined with this same Hasidic community.  All those questions about why her mother left come flooding back as she is surrounded by the culture of Hasidic Judaism. 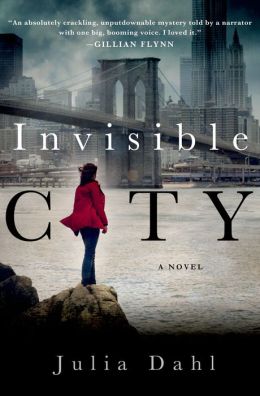 The body found at the scrap yard is that of Rivka Mendelssohn, the wife of the scrap yard’s owner.  As Rebekah watches over the activity at the crime scene, she is puzzled by some of the actions taken.  Why are the police playing second fiddle to the men in the van with Hebrew lettering on it?  Further investigation on her part will reveal that because of religious beliefs, Rivka’s body will not undergo an autopsy and thus any investigation into her death is over before it can begin.

Julia Dahl infuses her story with detailed discussions of the beliefs of this ultra-Orthodox community.  While there was potential for this to slow down the story, in Dahl’s capable hands it only serves to enhance the reader’s knowledge – for most of whom this will be new information.  Julia Dahl also knows the newspaper industry and the work done by stringers, lending the feel of an insider’s look into that career path.  The discussions on both of these topics flow natural from both the plot and the characters interactions with each other.

In the course of her reporting on the case, Rebekah meets Saul Katz.  In turns out that Saul knows Rebekah’s mother.  For this reason, when Saul asks Rebekah to help him expose Rivka’s killer, she finds herself wanting to help.  And maybe in the process, she will learn something about her mother.  The only problem is that the police seem to think that Saul has ulterior motives for interfering with the newspaper’s coverage of this murder.

Invisible City is a debut novel and the writing is at times a bit clunky, but Julia Dahl’s understanding and familiarity with the Hasidic community is always evident.  Any minor flaws are thus easily overlooked.  Ultimately, it is the characters and their unique views on various topics that will ignite the interest of readers everywhere.  This is the first book in a new series.  It looks as though the next book is going to focus more on Rebekah’s mother, which seems as though it is going to be a very compelling storyline.