Are you looking for a leisurely way to pass a summer evening? Then scope out your most comfortable reading chair, pour yourself a favorite libation, surround yourself with a variety of hors d’oeuvres, crack open Queen of Hearts – the latest novel from Rhys Bowen – and Bob’s your uncle.

Queen of Hearts is the eighth book in the “Royal Spyness” series, featuring Lady Georgiana Rannoch (thirty-fifth in line for the British throne). Just like the other books in the series, Rhys Bowen has given readers the gift of a light-hearted read containing favorite characters and a convincing mystery. 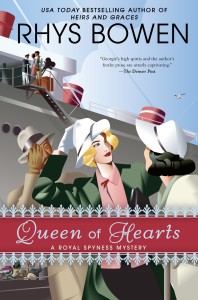 Queen of Hearts
by Rhys Bowen

This time out, Lady Georgie has been roped into traveling to America with her mother, Claire Daniels. What is the reason for this impromptu journey? Yet another divorce for Claire, the former actress turned socialite. Luckily for Georgie, the trans-Atlantic trip includes not only Wallis Simpson, Princess Promila, and Cy Goldman, but the love of Georgie’s life, Darcy O’Mara.

Darcy tells Georgie that he is secretly tracking a jewelry thief he believes to be on-board. Before arriving in New York City, he will be proven correct and Lady Georgiana might just have witnessed another murder. Meanwhile, Claire has been re-discovered by Hollywood’s hottest director, who whisks both her and her daughter (and their maids) off to California.

Readers who long for the days of old Hollywood will thoroughly enjoy the nostalgic feel Rhys Bowen creates once her characters reach the West Coast. Classic film studios with their air of exclusivity, legendary movie stars (like Charlie Chaplin) poolside at the Beverly Hills Hotel, and gorgeous mansions high above Los Angeles are just some of the delights in store. Lady Georgiana really comes into her own in this new location, never once losing her charm and wit.

Longtime fans of the series will delight in the scenes between Georgie and Darcy, as they move ever closer to their future together. But, of course, things never go as smoothly as planned and in standard traditional mystery form, a planned weekend in a secluded mansion becomes the scene of a murder when the home’s owner, Cy Goldman, is found bludgeoned to death. And all of his guests are now suspects.

Never one to disappoint on the mystery front, Rhys Bowen weaves these various threads together and exposes the secrets of each character. Even with that, Queen of Hearts remains at its core, a joyous romp through the past. Once Georgie, Queenie, Belinda and Claire are through with it, America will never be the same. Rhys Bowen once again leaves readers wanting more of Lady Georgiana Rannoch and her quirky collection of misfit relations.