Years from now, people will still be arguing over the Agatha Christie Estate’s decision to authorize the writing of a new Hercule Poirot novel, but regardless of your stance on that choice, what really matters in the end is the quality of the work. In the case of The Monogram Murders, Sophie Hannah has written a novel worthy of the Grand Dame herself, while at the same time exposing a whole new generation to the genius of Monsieur Poirot.

Since she knew that her literary voice was going to be different from Agatha Christie’s, Sophie Hannah made the wise decision to introduce a new narrative voice to tell the tale of The Monogram Murders. So she created Scotland Yard detective, Edward Catchpool. Readers watch Poirot work his deductive magic through the eyes of this less experienced, but eager to learn, detective. This technique also allows Poirot to continue his tradition of pointing out important clues, without explaining to the reader (or Catchpool) their true significance. It is very much a mentoring type relationship and readers will quickly warm to Detective Catchpool and hope for his return should future Poirot novels be sanctioned. 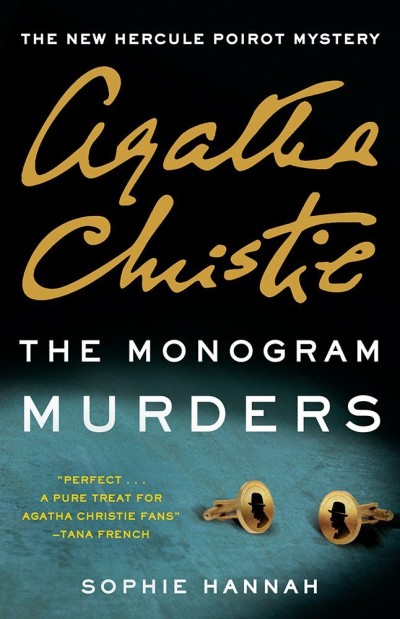 The Monogram Murders
by Sophie Hannah

What would a Hercule Poirot novel be without a beguiling mystery onto which the Belgian Inspector must focus his “little gray cells?” As she does with her own series, Sophie Hannah here creates a complex and almost unsolvable dilemma for her characters to investigate. At the Bloxham Hotel, three dead bodies have been discovered in three different rooms, on three different floors, all with a single engraved cufflink placed in their mouth.

As is common in Golden Age traditional mysteries, the reader is given a smallish pool of suspect upon whom suspicion is cast. The idyllic village setting allows for quirky characters and interesting settings. Multiple times throughout the novel, Poirot gathers his suspects together within a single room to question them and elucidate his theories. Of course, fans of Agatha Christie will expect that the final reveal happens in just such a single room setting. The complexity of the plot is very similar to classic Christie novels and while it is also very appropriate for the time period of the story, there is still something “modern” about the premise. This should help to pull in readers who are not necessarily fans of the traditional mystery, but are interested in Sophie Hannah’s psychological approach to crime fiction.

One of the joys of Hercule Poirot is watching his fastidious nature in regards to his immediate surroundings and how his observations are unique even though those around him are seeing the same thing. Sophie Hannah’s Poirot remains faithful to the Christie original and I trust that Agatha Christie would be honored by this tribute to her creation. Readers who give the book a chance are sure to find much to enjoy in this new tale. With Sophie Hannah as their guide, readers can travel back to the days of mystery past – when things seemed so simple on the surface, but much tension boiled just below the false façade. It is there that Hercule Poirot puts his deductive reasoning to the best use and the mystery at the core of Sophie Hannah’s The Monogram Murders is a worthy puzzle for the classic detective.