In her second novel, Vanished, Elizabeth Heiter wastes no time jumping into the story and rarely slows down during the mad-dash to the end. Thriller fans should not miss this paperback original by a promising new name on the suspense landscape.

Vanished is a story that will seem familiar to fans of the genre. In it, a FBI profiler discovers that a serial criminal has struck again after a long dormant period. Only in this story, the profiler assigned to help solve the case happens to have been one of the intended victims in the criminal’s earlier abductions – one which resulted in the disappearance of her best friend.

The true test in novels of this sort resides firmly in the strength of the main character to engage readers. In this area, Heiter has succeeded without question. Evelyn Baine is a biracial female in a profession that can still often feel like an “old boys club.” Evelyn is complex and interesting with a personal history that is varied enough to allow for some character development throughout both this particular book and the series moving forward. Readers are sure to immediately connect with her and the struggles she faces from both the internal and external aspects of her chosen career. 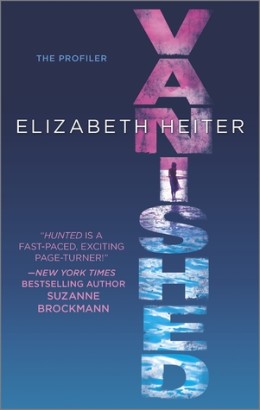 Of course, a main protagonist cannot exist in a vacuum and Heiter surrounds Evelyn with an authentic cast of characters. Even the villain, The Nursery Rhyme Killer, feels original and scary. The small community of Rose Bay, South Carolina is understandably shaken to its core by this terrifying threat. As law enforcement struggles to keep emotions in check, the community as a whole begins to disintegrate around them.

It was an important decision to have Evelyn return to her hometown for this investigation. This choice allowed Heiter to explore the resentment and suspicion that the local law enforcement might feel towards Evelyn without robbing the character of her celebrated career achievements prior to this case. Readers can easily relate to how a case this intimate to who Evelyn is would affect her in the ways that it does. Particularly because of her involvement and history with the earlier victim, Evelyn reveals herself to be simultaneously strong and vulnerable as she attempts to find justice for her childhood friend, Cassie.

Given the nature of the case, Elizabeth Heiter does a fine job of treading the line between being too graphic (so as to make it seem exploitative) and remaining graphic enough that the seriousness of the stakes are not lost on the reader. Evelyn needs closure on this part of her history and readers will feel that tension as the suspect list narrows and the noose begins to tighten.

The conclusion of the novel is satisfying and suspenseful, leaving readers with the sense that Evelyn Baine can now move forward without the guilt that has been weighing her down. Elizabeth Heiter is a relatively new name in the suspense thriller world, but readers are noticing and she is sure to be entertaining us for years to come.