When Laura Lippman had Tess Monaghan give birth to her daughter Carla Scout, it seemed like the death knell for the series. After all, Tess was hardly the type to put her daughter in danger to continue her career. But then, at the end of last year’s stand-alone novel, After I’m Gone, Tess was back. She hired Sandy Sanchez to work for her private investigation firm and it was clear that readers hadn’t seen the last of Tess. Next week, Laura Lippman releases Hush Hush, the first full length Tess Monaghan novel in seven years and since the old adage about absence making the heart grow fonder couldn’t be truer, expect critics and fans to be justifiably lavishing praise on Tess Monaghan, Laura Lippman, and Hush Hush.

Three years have passed since The Girl in the Green Raincoat and Tess has her hands full wrangling her beloved toddler. It is only fitting that the case that draws her attention in Hush Hush is one that revolves around motherhood. Tess is a confident, strong and successful business woman, but even she questions how good of a mother she is. Lord knows, there is certainly no shortage of folks willing to give advice to an insecure parent. But what Tess cannot wrap her head around is how a mother could be so neglectful of her own child that death would be the result.

That is exactly what happened to Melisandre Harris Dawes twelve years ago when she got distracted and left her baby in the car on a hot day. Against public outcry, Melisandre took a plea of criminal insanity and served her time. Now she is returning to Baltimore and wants to hire Tess’ firm to provide security for her. Tess is not convinced, but as a favor for an old friend, she agrees to the assignment. 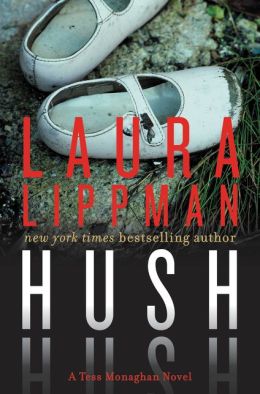 Things would be much easier if Melisandre was not stirring up folks by moving forward with a controversial documentary project for which she would like her other children to be interviewed. When another death happens within her small social network, the lynch mobs are ready to light the torches and storm the castle, so to speak.

The central theme of Hush Hush is motherhood. What makes a good parent? Is it a given that a mother must lose her identity as an individual in order to ensure the best for her child? And most importantly, who gets to decide if one is a “fit parent?” Laura Lippman is able to present all sides of these dilemmas without showing a bias, all while also telling a cracking good crime story at the same time. Lippman is certainly aware of the high profile court cases against mothers in the last few years and the public scrutiny and derision those women faced during their trials. She uses that to her advantage without ever taking the easy path to simple answers.

Fans of Laura Lippman’s stand-alone novels will also be excited to hear that Hush Hush contains all of the trademark elements of those non-series books. Here Lippman again tells a story with a compact and tight timeline (about two weeks), but which is deeply affected by the past. Lippman’s ability to weave history into her present day plotline without any confusion is virtually unparalleled in crime fiction. Hush Hush is a Tess Monaghan novel, but the depth and social relevance feel very much in line with Laura Lippman’s stand-alone output.

Laura Lippman consistently writes excellent crime fiction that engages readers and pushes the boundaries – not of the genre, but the boundaries of writing in general. She experiments with format, style, tone and voice – making each novel a treasure in need of excavation, examination and appreciation. Hush Hush may be just another in a long line of quality novels, but no doubt more than one fan will consider it her best yet. Certainly, best-of lists and award nominations are in its future. Read Hush Hush now, while it is hot off the printer.

The BOLO Books Review of After I’m Gone

Disclaimer:  A print galley of this title was found in the Bouchercon swag bag. No review was promised and the above is an unbiased review of the novel.