Cover Reveal – The Skeleton Haunts A House by Leigh Perry

BOLO Books is once again honored to be part of the cover reveal for the new “A Family Skeleton Mystery” from Leigh Perry.  The title of the new book is The Skeleton Haunts a House.

If you are unfamiliar with this series, get your bones to your local bookstore and purchase a copy of the first two books in this wonderfully fun series – A Skeleton in the Family and The Skeleton Takes a Bow.

Then, be sure to pre-order the new book. Doing so would make Sid a very happy skeleton.

The cover and jacket copy for The Skeleton Haunts a House can be found below. 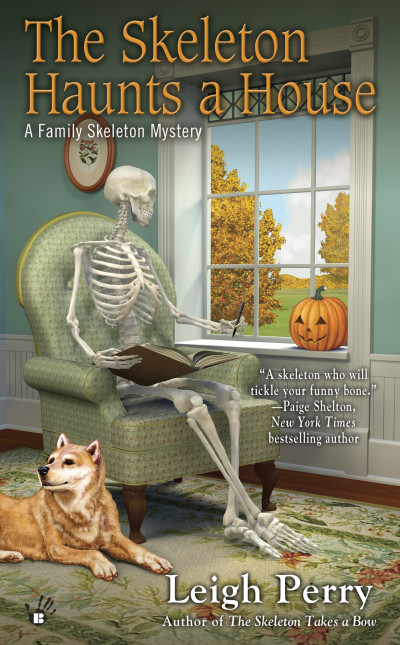 What holiday could bring more warmth to a skeleton’s chest cavity than Halloween? And when you’re a living skeleton who’s not supposed to be seen outside the house, it’s a welcome chance to get some fresh air and rub bony elbows with people. That’s why Sid doesn’t mind wearing a full-body dog suit and going as Scooby-Doo along with Georgia Thackery’s Velma to the Halloween Howl.

Sid can’t wait to go through the Haunted House—but he gets rattled for real when a genuine dead body is discovered. Trapped inside as the police quickly seal off the crime scene, Sid makes no bones about dropping the dog suit and posing as an actual skeleton. This murder is a skull-scratcher, but as long as Sid is on the inside, he might as well case the joint to figure out who used the cover of darkness to commit the perfect crime…

You don’t want to miss this series folks.  The release date for The Skeleton Haunts a House is: October 6, 2015.  But remember, pre-ordering books makes a big difference!  So, why not order today.