What You Left Behind –
The BOLO Books Review

The idea of a crime novel which taps into the social zeitgeist of the moment is hardly a new concept. But the fact that the public’s attention span is always getting shorter means that there is constantly a new social ill worthy of being addressed through today’s fiction. In the case of Samantha Hayes’ What You Left Behind, the topic du jour happens to be online bullying and the rash of teenage suicides which can result from this relentless barrage.

What You Left Behind is the second novel to feature Detective Inspectors Lorraine Fisher and Adam Scott. The new novel begins with Lorraine going on holiday with her daughter and it is only later in the novel that Adam arrives. This allows readers to get to know more about Lorraine as a separate entity from her husband. 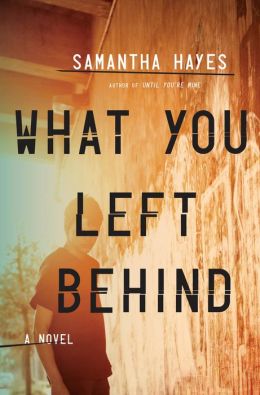 What You Left Behind
by Samantha Hayes

In the novel, Lorraine Fisher is visiting her sister (Jo Curzon) in the small village of Radcote, in Warwickshire. She is looking forward to a relaxing time spent with her sibling and nephew. Needless to say, the vacation is short-lived as a series of events require that Lorraine engage with local law enforcement – not all of whom she is friendly with.

The village of Radcote was rocked by series of suicides two years ago. In the time since, the townsfolk have slowly been able to move past the tragedy. However, just as Lorraine is arriving, a new suspected suicide has occurred. When another teen also kills himself shortly thereafter, everyone begins to worry that it is the start of another series of unnecessary deaths. Lorraine and Adam wouldn’t typically get involved, but when their nephew Freddie suddenly goes missing, the fear hits just a little too close to home. Inquiries around the village quickly reveal that Freddie Curzon was the target of some vicious online attacks and that his disappearance may be related.

A local homeless shelter for teens may hold the answers. New Hope is run by the Hawkeswell family and while they were once considered pillars of the community, the fact that their own son was the last victim in that earlier spate of teen suicides leads Lorraine to believe they might know more than they are saying. Especially Gil, who happens to be autistic and is always lurking around every corner. Gil often says things that don’t make logical sense, but which also somehow seem oddly accurate and precise. Is it possible that he is somehow involved?

What You Left Behind is a fast read. There is nothing ground-breaking in the tale, but Samantha Hayes is able to tap into the modern day fears faced by parents world-wide. Fortunately, where some of the revelations could have become cliché, Hayes manages to throw in a few unexpected complications which will keep readers interested. Series fans will find much to appreciate about Lorraine and Adam and will no doubt want to follow them on their journey in future novels.