Dying Brand is the third novel in Wendy Tyson’s traditional mystery series featuring Allison Campbell. Readers familiar with the series will be excited to see Allison and her gang of cohorts again, but Dying Brand works equally well for those unfamiliar with their history.

Allison Campbell is an image consultant, a job that simply by its nature puts her into contact with various kinds of people. In the past, Wendy Tyson has used Allison’s career as a convincing way for Allison to get mixed up in investigating some unsavory activity. With Dying Brand, however, the crime at the core of the story hits closer to home for Allison.

This time out, one of Allison’s former boyfriend’s is murdered and his widow thinks that Allison was somehow involved. Even though Allison hasn’t seen Scott Fairweather in years, a small annotation in his calendar puts her on the radar as a suspect. When compromising photographs of the two together begin to be mailed to Allison and her circle of friends, she fears that she is being set-up. 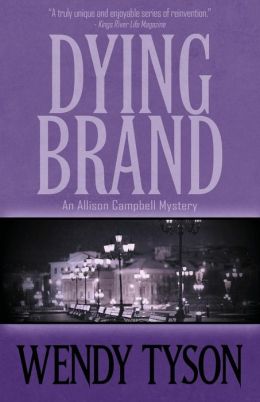 Wendy Tyson’s series is often classified as a cozy, when in fact, the style and substance often defy that categorization. Readers should go in knowing that this is not going to follow any predefined tropes of the genre. There is little that will really offend, but it is more hard-hitting than readers would expect from a true cozy.

Much of Dying Brand deals with Allison on the home front. As one would expect, the appearance of these photographs adds more strain to her current relationship – a relationship that already has its fair share of issues. Adding fuel to the fire, Allison’s long estranged sister returns with her daughter and enough problems to keep the whole family tied up.

One of Scott’s co-workers is also on the run and chapters detailing her actions clue readers in that all may not be what it seems. This road trip takes the character from Philadelphia to Florida and then back up the coast with stop-overs in North Carolina and Maine. How this all ties into Allison’s situation is skillfully doled out to the reader at just the right speed.

As the title foreshadows, much of Dying Brand centers on corporate image – that public facing side that is so often skewed by desire and not a true reflection of reality. But what Tyson does so well, is to show that people – everyday individuals – also have “brands” and the image we portray of ourselves to the outside world may or may not gel with the truth.

There are also some significant developments in the relationships of secondary characters, but Allison really is the focus in this new novel. Readers will be happy to know that within the pages of Dying Brand, Wendy Tyson has laid some interesting groundwork for future entries in the Allison Campbell series.