In just three years, Seventh Street Books has assembled a stellar roster of authors. Winning awards and attracting critical praise, their authors have turned this imprint into the place to go for solid, literary crime fiction. Even their debut authors – such as Lori Rader-Day and Allen Eskens – begin their careers writing polished and exciting first novels. Add Stephanie Gayle to the ever-growing list of must-read authors published by Seventh Street Books. Her first mystery, Idyll Threats, is an absorbing read. By anchoring the story with a lead character whose voice is rarely heard in crime fiction, Gayle practically insists that reader’s interest be piqued.

Thomas Lynch is a closeted gay man working as the police chief in the small town of Idyll, Connecticut. Because the novel is set in 1997, Thomas’ voice sounds authentic and the struggles Stephanie Gayle presents him with are realistic and timely. Readers will immediately bond with him and long for his struggles to come more in line with our current day thinking – except that sometimes in small towns, that stigma of otherness has never really faded.

The case at the heart of Idyll Threats involves the discovery of a twenty-two year old girl’s body on the local golf course. Shot four times in what is clearly a murder, the town seems incredulous that such a thing could happen in their enclave. Of course, it falls to Chief Lynch and his misfit crew of officers to investigate. 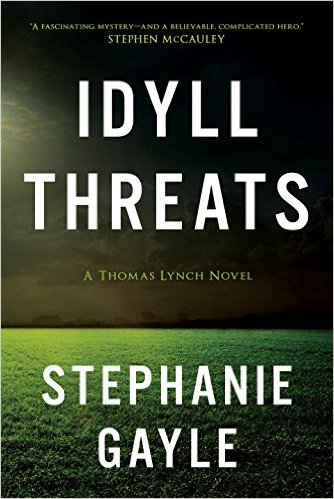 However, Thomas Lynch has an even bigger secret. He saw the victim just hours before she died. She was having an intimate encounter with an older man in one of the local abandoned buildings known as a safe haven for such illicit trysts. How does Thomas know? He was there as well – with his latest one-night stand. Given that no one in town is aware that Thomas is gay, there is no way he can tell his team this important clue without exposing himself – so to speak.

Stephanie Gayle devotes much of the novel’s plot to this internal struggle haunting Thomas Lynch. When one’s personal secret interferes with professional duty, how does one mitigate the damage done on both fronts? And on which side should the loyalty fall? Stacking the police force with homophobes may seem like a cliché, but there is never a false note in their depiction. What makes this situation so poignant is that Thomas’ previous partner – back in the big city – knew all of his secrets and accepted him for who he was. Unfortunately, he was killed in the line of duty – a guilt that Thomas carries with him every day.

Idyll Threats covers a two-month time span, as Thomas and his team investigate multiple avenues and clear various suspects. Due to some witness statements, the hunt for the killer eventually turns into a bit of a witch-hunt for gays in the town. It becomes clear that this case is going to put everything that Thomas knows and loves at risk.