Karin Slaughter first came on the radar of crime fiction fans back in 2001. Since then, she has released a string of very successful series novels, short stories, and one critically acclaimed historical standalone. Next week, Slaughter opens a new chapter in her writing career by releasing her first psychological thriller, Pretty Girls. Her legion of fans will flock to this new novel and new-comers will now get a chance to see what all the fuss is about.

Pretty Girls is the story of two sisters who took very different paths on their road to healing the scars that arose after the disappearance of their older sister. Claire Scott took a relatively smooth path to marriage and now lives a comfortable life as the trophy wife of her husband, Paul. In almost the complete antithesis of Claire, Lydia Delgado struggled through drug addiction and aimlessness until she too found a semblance of normalcy in her current life with a loving husband and daughter. 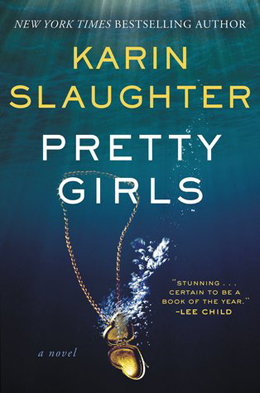 Their contented existences are shattered after a traumatic attack results in the death of Paul Scott. Unsure how she is going to go on, Claire is surprised to encounter Lydia – whom she has not spoken to in years – at Paul’s gravesite. In spite of Lydia’s long standing disdain for Paul, the two sisters decide to talk things through in an effort to build bridges. Old wounds are dredged up with an ultimate aim towards understanding and healing.

But it is the secrets that Claire has found hidden on Paul’s computer that become the glue that once again binds these sisters together. Working in tandem to investigate just what Paul Scott was guilty of – adultery, fetishism, or worse – Claire and Lydia must move beyond their pasts, even as the present day disappearance of another child becomes a constant reminder of all they have lost.

Woven through this tale of sisterly bonding, Karin Slaughter presents chapters featuring the words of the three girl’s father. In the form of a diary-like letter to his missing daughter, Sam Carroll exposes the constant hurt and pain this family is suffering because of the uncertainty surrounding a missing child. As the novel progresses, Sam’s chapters begin to supply some of the answers no one knew existed.

Through it all, Karin Slaughter keeps the tension high and the stakes higher. The real strength of Pretty Girls is the intricate plot. Some readers may find one of the later plot twists a bit unrealistic, but this will not affect the forward momentum the story has achieved by that point. The first half of the book is dominated by the desire to get to know these two women, but by the mid-point, reader’s sole focus will be deducing exactly what is going on as the plot strings begin to tie together in an unexpected knot.

Pretty Girls is a novel about family. Through the lens of crime fiction, Karin Slaughter takes readers on a journey through the process of healing and acceptance. Thankfully, the bonds of blood are strongest when faced with crisis, because that is often when support is most needed. Pretty Girls is sure to add to Karin Slaughter’s accumulation of fans and have them all awaiting whatever she decides to write next.

Scheduling Update: Be sure to stop back at BOLO Books on Tuesday, September 29th for an insightful launch day interview with Karin Slaughter.