Blessed Are Those Who Mourn – The BOLO Books Review

Kristi Belcamino certainly knows how to grab reader’s attention. This not only refers to her ability to raise her name-recognition among the public due to the improvement she displays with each new book in the Gabriella Giovanni series, but also refers to her skill at forcing a reader to pay attention by writing kick-ass first chapters.

In Blessed are Those Who Mourn, a simple day at the beach takes on ominous overtones within a matter of paragraphs. What could have been a harrowing event turns out to be nothing more than an over-reaction on Gabriella’s part – no doubt caused by her career and history. However, just as readers begin to breathe again, Belcamino pulls the rug out from underneath both them and her heroine. 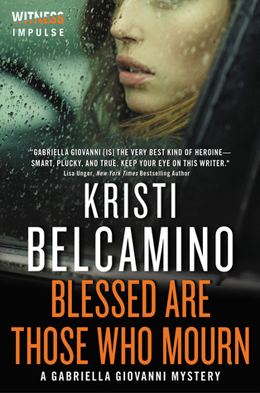 Blessed are those who Mourn
by Kristi Belcamino

Unlike with most series authors, Kristi Belcamino is not afraid to take risks in her timeline. Where the majority of authors choose to age their characters slowly, Belcamino has set each of the novels in the series a few years apart. What this does is allow for more character growth than is common in other crime fiction series. As Blessed are Those Who Mourn opens, Gabriella and Sean’s daughter, Grace, is five years old. While the couple has not yet married, they are living a typical family life – albeit, one where the parents have unusually busy and stressful careers.

When a new crime spree rocks the city, our stalwart couple thinks they are doing their best to protect that family when in actuality, they have inadvertently put everything at risk. The kidnapping of Grace becomes the centerpiece of the novel and the countdown clock begins.

From that moment, the novel becomes an emotional rollercoaster. Belcamino uses the current situation as a gateway into a deeper examination of Gabriella Giovanni’s past. Fans of the series know that Gabriella’s sister was abducted and killed years earlier and with history repeating itself, the outcome of this current case will determine the future of all those involved. Belcamino skillfully navigates the flashback sequences in a variety of ways while never losing sight of the current-day thread of the plot.

An early reference to the local military ship graveyard foreshadows a dramatic and exciting climatic scene where past and present meet and both Gabriella and readers get the answers they have sought for some time.

Having a secondary character named Santangelo is a nice reference to not only Gabriella’s Italian background, but also to one of Kristi Belcamino’s favorite authors – the late Jackie Collins. This idea of learning from those who have come before plays out in the novel’s plot as well. Gabriella finds herself taking a younger reporter under her wing in an effort to pay forward the opportunities she has been granted.

If Blessed are Those Who Mourn is the last readers see of Gabriella Giovanni, it makes for an appropriate end to her story, but there is also plenty of story left to tell should Kristi Belcamino decide to revisit the character again in the future. Whatever she does, the reading public is sure to be there to join her.