After the Crash – The BOLO Books Review

Once in a while, you stumble upon a book with a premise so intriguing, so clever, you instantly know that if the author can pull this off, it is going to be a great book. After the Crash by Michel Bussi is just such a novel.

On December 23, 1980, a plane crashes into the Swiss Alps. One hundred and sixty-nine passengers are killed, but miraculously one three-month-old baby survives. The only problem is there are no identifying features or clothing and there just happened to be two baby girls of that age on the plane in question. When both sets of grandparents claim the child as their grand-daughter, it spurs a media frenzy and a mystery which endures for the next two decades.

Was the baby Lyse-Rose de Carville heir to the de Carville’s family fortune or was she Emilie Vitral, a member of a family that was less well-off financially, but no less loving? Eighteen years later, a private detective discovers the truth about the girl now living her life as Lylie – only to die before he can reveal this information to anyone. 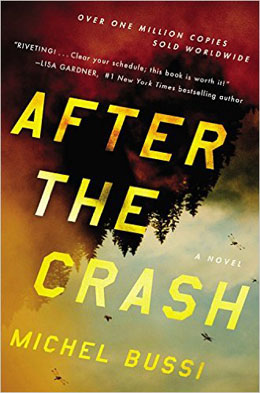 After the Crash by Michel Bussi

This plot alone would have made After the Crash a compelling read, but Michel Bussi has structured the novel to make it virtually impossible for the reader to stop turning the pages. There are two main time periods during the book. There is the book’s present day (1998) – the year Crédule Grand-Duc, the private investigator hired by one of the families, uncovers the truth. And then there is Grand-Duc’s journal – the document he left behind, which recounts his eighteen years of investigation. This journal represents the reader’s only glimpse into the past.

When the journal falls into the hands of Marc Vitral, one of Lylie’s possible siblings, the truth is slowly revealed. Michel Bussi crafts the novel is such a way that just as Marc – and eventually, Malvina de Carville, another possible sibling – get closer to a major revelation within the journal, something always causes them to stop reading, prolonging the disclosure to both them and the reading audience.

Translated from the French by Sam Taylor, After the Crash never reads as though it was original written in another language. This is the first of Michel Bussi’s novels to be translated into English, but based on the strength of this story, it surely won’t be the last.

There is a level of psychological insight in After the Crash which makes the reading all the more remarkable. Various characters are in mind-spaces that are unique and yet understandable. Puzzling out how their minds are working is part of the joy of reading the novel, but when coupled with the fast-paced thriller aspects of the 1998 storyline, After the Crash becomes truly difficult to set aside until all has been revealed.

Michel Bussi has built in some unexpected detours within the story which of course delay the ending, but which also enrich the atmosphere created by the author. When the final few twists are exposed, the ending is more than satisfactory and although the loose ends are a bit more tied up than is often the case in crime fiction, After the Crash never feels forced.

Give After the Crash a try if you are a fan of psychological suspense, family sagas, or high-stakes thrillers. Michel Bussi has crafted a novel that blends all these styles together in masterful ways.