Any time a writer attempts to re-imagine a beloved classic, especially when doing so in the same style as the original, the journey before them is a treacherous one. On the one hand, it is almost guaranteed to disappoint some fans of the original; while at the same time, staying too true to the classic tropes could potentially bore modern audiences. With her newest novel, Lyndsay Faye navigates both pitfalls on this tricky path with aplomb. Jane Steele is both a loving tribute to Jane Eyre and a cutting-edge adaptation intended to entertain modern readers. 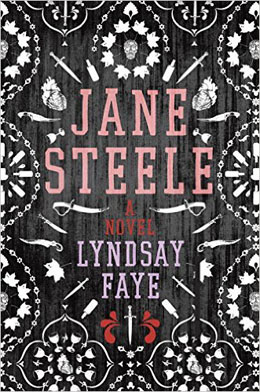 It should be noted that Jane Steele was inspired by Charlotte Bronte’s Jane Eyre; it is not intended to be a revision of that much-loved bildungsroman. The character of Jane Steele is as much a fan of Jane Eyre as most of the readers of this new novel are likely to be. Throughout the tale, our new Jane references favorite passages and situations from the Victorian Jane’s story and each chapter begins with an epigraph quoting a few lines from Jane Eyre.

A Victorian bildungsroman is simply a fancy way of saying a novel is structured as a coming-of-age story. Many of the books that follow this model attempt to cover the majority of a character’s life – often from birth to death or at least old age. Lyndsay Faye structures Jane Steele to follow a similar path. Readers first meet Jane as a young girl and proceed to follow her as she matures and develops into a confident woman. Like Jane Eyre, Jane Steele has very modern viewpoints on the role of women in society. Indeed, much of the success (and some of the backlash) bestowed upon the original can be attributed to this non-conforming feminine role model and that will most certainly be one of the reasons modern readers fall for Jane Steele as well.

Even though the novel is set generally within the Victorian period, Jane Steele is not going to let the males species control and dominate her. So much so, that Miss Steele becomes an unwitting serial killer. Never one to be ashamed of what she has done – after all, she really had no choice – she is wise enough to know that keeping these murders secret is necessary for her ability to blend into society. How she commits these murders and more importantly, how she gets away with them is just one of the many charmingly subversive elements within Jane Steele.

Like Jane Eyre, this Jane goes from a bleak home-life to an even worse boarding school situation. Once she escapes from this virtual prison, she eventually finds herself in the employ of Mr. Charles Thornfield, acting as the governess for his daughter in what she believes is her ancestral home. Fans of the Brontë classic will no doubt see the similarities in these two journeys. But whereas Jane Eyre was advised to avoid the attic, Jane Steele is warned to stay out of the house’s basement. Tiny twists to the tale such as this will delight fans of Jane Eyre but also reinforce the fact that one needs to have no prior knowledge of the original to enjoy Jane Steele. 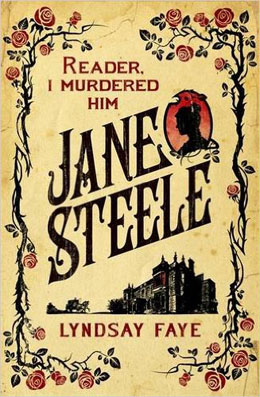 Lyndsay Faye succeeds with this novel because she never takes herself – or it – too seriously. Jane Steele reads like the perfect blend of outrageous satire and respectful homage. Historical fiction fans will love the details Faye paints of both the time period and the people who inhabit it. There is a major sub-plot involving immigrant Sikhs, so those with an interest in that unique culture will thrill in new discoveries.

As with many Victorian novels, names play a very important role in Jane Steele. Lyndsay Faye delights in creating monikers to rival those of Charles Dickens himself. In a clever twist on that theme, the actual meanings of some of the foreign names tie into the personality of said character. By manipulating tropes such as this, Lyndsay Faye is able to defy reader’s expectations, while confidently leading them down the comfortable path they expect. By the end, Jane Steele feels very much like a modern novel disguised as a classic bildungsroman. Even the romance elements in the novel feel fresh and forbidden. A non-explicit scene late in the novel is a master class in how to write seduction enticingly.

Regardless of how you classify Jane Steele, there is no denying that it is masterfully written, complex, and filled with trademark details that will only become more fleshed out with repeated readings. This novel is highly recommended.

SPECIAL EVENT: As an added bonus, I will be interviewing Lyndsay Faye during her book tour stop at ONE MORE PAGE BOOKS (in Arlington, Virginia), Wednesday, March 23 at 7pm. We’s love to see some of you there where you can get your new copy of the future classic JANE STEELE signed by Lyndsay herself.