When I first approached Nik Korpon about writing a guest post for BOLO Books, I knew it would be an interesting piece, but I had no idea we would get this!  When Nik wrote to say he thought he had the perfect essay to appeal to both my crime fiction blog followers and those that follow my theater-related posts on Facebook, to say I was excited would be an understatement.

Punhos Sagrado is the name of Nik’s novella in the new collection of interconnected stories called The Soul Standard. This will be important information to know as you read on about his creative process in crafting this story. 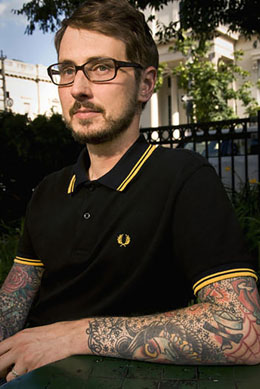 No, I Regret Nothing

I’ve got a bit of a contrarian streak in me. Part if it is probably from growing up in the punk rock scene, which tends to attract such people. Another part is probably because I’m inherently distrustful—but whether because I think someone’s lying to me or I’m getting took, I have no idea.

A lot of this has bled into my writing. I spent a good number of years after my MFA program trying to write the original story, something that had never been done before, which, in the crime genre, is pretty damn hard to do. Eventually I learned to relax because I realized there’s no story that hasn’t been written before, only stories that haven’t been written by me. The distinction between the two is slight, but it’s there.

But that doesn’t mean I didn’t keep trying. This generally took form as running the opposite direction from convention. Around the same time as when I wrote Punhos Sagrados, I wrote another boxing novella. In it, a boxer befriends a young boy who happens to be a jazz piano prodigy and the boy waxes poetic about Jelly Roll Morton with the boxer’s ex-con best friend while they all try to get the boxer’s girlfriend’s production of a Brendan Behan play off the ground.

Yeah, exactly. Despite the cobbled summary, I’m damn proud of it and think it’s a great read, and I’m sure all eight people who bought it think the same. Still, I loved writing that book and would do it again in a heartbeat. However, after that, common sense would say to go back to convention, but again: that contrarian streak.

When I started sketching out Punhos Sagrados, I knew I wanted to revisit the idea of a boxer. I tend to write in thematic clusters, and it was a nice, grounded story amid the more surreal and speculative ones in The Soul Standard. During the process, I was listening to Edith Piaf. I’ve always loved torch singers—Piaf and Billie Holiday are perpetual favorites—with the sadness and regret filling their voices, yet still tinged with something vaguely resembling hope. Listening to “Non, Je Ne Regrette Rien,” something clicked. I started thinking about the film La Vie en Rose, and how sad Edith Piaf’s life was (note: despite a number of biographies and public fascination with her, much of Piaf’s life is unknown, so I’m drawing on what I’ve read and watched), between the brothel she lived in as a young girl, the death of her two-year-old daughter, the murder of her first promoter at the club Le Gerney, her dying admiration of and inability to live up to Billie Holiday, and—most important for my novella—the death of the love of her life, Marcel Cerdan, whose plane crashed on his way to see her. It made me wonder, if she didn’t suffer through these things—and, in the same way, if Billie Holiday hadn’t lived the life she led—would they have been able to sing the way they did? And if not, was all of the pain and suffering worth it?

If you’ve read the novella, you’ve seen the crossovers: Marcel is the name of the boxer who is a bouncer at a gambling parlor called The Gurney, where there is a torch singer named Carissa (which is Portuguese for “sparrow” [Piaf’s last name was a nickname that meant sparrow {Amália Rodrigues, a Portuguese fado singer, is another favorite of mine, who I discovered when I lived in a small coastal village near Lisbon}]) who a few times sings “Não me arrependo de nada,” the Portuguese translation of “Je ne regrette rien,” (“I regret nothing”). Though, to be fair, I can’t pin the organ thievery in the book to any of those singers. That fucked-up-ness is my own fault.

Writing Punhos Sagrados felt very natural. There wasn’t the doddering and telling myself I’m a terrible writer and letting the self-loathing build up until it ruptured onto the page that my writing process generally is. In some way, it felt soulful, like the story was bubbling under the surface and only needed a crevice to slip through and be heard. Similar to the way, I imagine, those women were able to sing the songs they did.

Though if I’m being honest, I do have one regret: I’ve never written another novel about a torch singer. And I’d really like to. 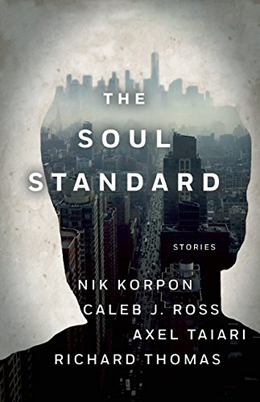 The Soul Standard is a novel-in-novellas, written by Nik Korpon, Caleb J. Ross, Axel Taiari, and Richard Thomas. The book will be out on 25 July 2016 from Dzanc Books.

Synopsis: Across four different districts of a city that has torn itself to shreds, four different interweaving tales (each written by a different author) play out. In “Four Corners,” a morally dubious banker must keep his employer happy at any cost. The next story, “Punhos Sagrados,” concerns a boxer who finds himself torn between honor and the woman he loves. “Golden Geese” follows a hardened criminal with a terrifying condition who must come to terms with the life he’s led. Finally, “Jamais Vu” provides a stunning denouement as a man searches endlessly for his missing daughter, a task which is complicated by a peculiar condition: his inability to recognize faces. Told in rugged, bare-knuckled prose, The Soul Standard is a nonstop thrill-ride down the darkened avenues and through the shadowed alleys of a nightmare town.

Nik’s story is a strong, gritty slice of noir. Each of the novellas can stand-alone, but of course have further resonance when read together. Here, for your convenience, is a soundtrack to your reading experience. I hope you all enjoy the book!