After writing a Frankenstein-inspired novel, some short fiction, and many poems, Kate Horsley is now making her crime fiction debut with The American Girl. It is the story of an outsider thrust into a tangled web without the benefit of memory and a story of the woman galvanized to help her.

In The American Girl, Quinn Perkins is an American exchange student living with the Blavette family in the French town of St. Roch. As the novel opens, Quinn is found wandering from the woods, barefoot and covered in blood. She falls into a coma as the police struggle to piece together what happened to her. Once she begins to emerge from the coma, suffering from amnesia, the police have already determined that the entire Blavette family is missing and Quinn’s experience could be directly tied to their disappearance.

Molly Swift, an American journalist, finds herself in a position of reporting on the mystery from the ground in St. Roch. It isn’t very long before she has talked her way into Quinn’s hospital room by pretending to be the girl’s Aunt. Torn between wanting Quinn to recover her memory and wanting to keep her false connection to the girl under wraps, Molly must rely on her gut instincts to ferret out the truth. 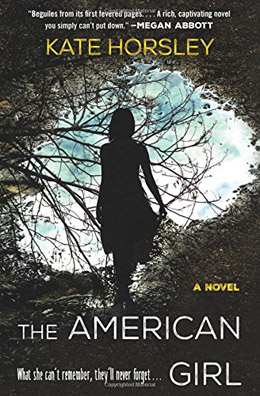 The American Girl by Kate Horsley

Kate Horsley works with dual narration throughout The American Girl. The present-day activity is told from Molly’s point-of-view as she attempts to figure out what happened to Quinn and the Blavettes out in the woods. Interspersed with that are sections focusing on Quinn herself – both blog posts from her early days with the Blavette family and diary entries as she works with medical personnel to regain her memory. This technique allows Horsley to time revelations key to the case so as to maximize their effect on the reader experience.

Readers will quickly realize that much of what must have happened revolves around the peculiar Blavette family: Matriarch Emilie, free-spirited Noémie, and bad-boy Raphael, as well as the other local school children and townsfolk Quinn encounters during her brief stay. As readers find out more about Quinn’s experience with the Blavette Family, her own rebellious behavior, and the legend of the local caves hidden deep in the woods, The American Girl begins to read like the modern love-child of Edgar Allan Poe and Daphne Du Maurier. Elements of the Gothic collide with modern conveniences such as texting and Snapchat.

Meanwhile, Molly adds another side to the story. She works for an NPR-type radio program intent on highlighting police incompetence and other societal ills, so her sole goal going into this is to get the scoop. What Molly never counted on was her growing loyalty to Quinn and the developing feelings she has for Valentin, a member of the local police force. These elements feel very “of the moment” and readers will see allusions to both Serial-like podcasts and tabloid journalism while reading The American Girl.

Kate Horsley is to be commended for blending the classic elements of the genre with her more contemporary tone. For a crime fiction debut, the plot is well-constructed and the characters fully-developed enough to engage. Readers will certainly add Kate Horsley to their list of authors to watch in the future.

REMINDER: The panel I am moderating at Bouchercon 2016 in New Orleans features Kate Horsley, along with Rachel Howzell Hall, Karin Salvalaggio, Yrsa Sigurdardottir, and Kristi Belcamino discussing strong lead characters in crime fiction. I hope you will join us.