The Fixes – The BOLO Books Review

When Owen Laukkanen ventured into the young adult writing world under the pen name of Owen Matthews, he created a new, unique style that is all his own. Just as with the Anthony-Award nominated How to Win at High School, Owen’s new YA novel, The Fixes, employs the briefest of chapters, contemporary and unfiltered language, and topical themes to tell a cutting-edge story highlighting the trials and tribulations of today’s youth.

The Fixes is the story of Eric Connelly, an impressionable student at Capilano High. Eric has always felt the weight of his family’s expectations for his future, but he also holds a secret that threatens that strong bond. Eric is gay and when he meets the stunningly handsome Jordan Grant, all rational thought goes out the window.

At Jordan’s urging, Eric starts calling himself “E” and joins up with the Suicide Pack – a faction of reckless teens hell bend on exposing the hypocrisy of society. As their schemes and “fixes” increase in risk, E begins to question his own choices; but is it too late to turn back? And what of his infatuation with Jordan Grant? 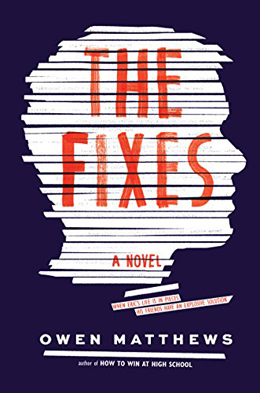 The Fixes by Owen Matthews

The Suicide Pack employs social media to document and spread their message. Readers unfamiliar with the likes of Vine, Kik, and SnapChat will get a crash course in how teens today stay connected with the world. Parents play a slightly more significant role in The Fixes than they did in How to Win at High School, but still more as foils for our main cast of characters.

The wild and rash nature of the activities the Suicide Pack partake in makes The Fixes a bit controversial. Even readers who feel that the kids are justified in their dissatisfaction with the explicit and implicit biases of society will have a hard time condoning their rebellious actions. However, Owen Matthews includes enough “lessons” and ramifications to demonstrate the flaws in such activities.

In the end, The Fixes is a work of satirical nature, not unlike the films Heathers, Mean Girls, and even WarGames to some extent. The novel could be used to generate some good conversations between children and parents about the unfairness of the world and how to handle conflict. It was also refreshing to see the LGBTQ elements handled so well. It is rare when a young adult novel – or any novel for that matter – features a lead gay character where the sexuality of the character is not the main element of the plot and character’s journey. Eric’s sexuality is only one small part of a very complex human being.

Readers who consume and enjoy The Fixes might feel compelled to shout about their love of the book on social media. Allow me to suggest a tweet:

“Hunty, The Fixes is lit AF. @OwenMatthewsYA is #amazeballs”

Disclaimer: A e-galley of this title was provided to BOLO Books by the publisher. No review was promised and the above is an unbiased review of the novel.