The Silence of the Sea – The BOLO Books Review

Since her debut novel, Last Rituals, Yrsa Sigurðardóttir has been one of the most popular Icelandic authors of crime fiction. In 2015, The Silence of the Sea was awarded the Petrona Award for Best Scandinavian Crime Novel of the Year.

In The Silence of the Sea, a personal luxury yacht is being returned to an Icelandic harbor when the world is stunned to hear that all seven passengers have vanished. On board were a family of four – husband Ægir, wife Lára, and their two young daughters – along with three crewmen. Since the ship was owned by the husband of one of Iceland’s most frequent targets of tabloid scandals – Karítas – the public quickly becomes fascinated with the disappearance of these seven individuals.

Thóra Gudmundsdóttir, a lawyer by trade, is hired by Ægir’s parents to help navigate the paperwork involved in cases where there are no bodies found. With some family troubles occurring in her own life, Thóra sympathizes with the parents and wants to ensure they are able to collect on the insurance money that will allow them to raise their youngest grandchild – left behind with the her grandparents during this recent family vacation – and create some closure for all those in mourning. 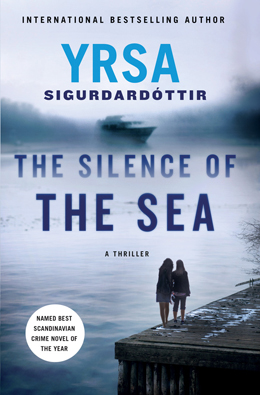 The Silence of the Sea by Yrsa Sigurdardottir

Yrsa Sigurðardóttir has structured The Silence of the Sea as a dual narrative – alternating chapters between those documenting Thóra’s investigation with scenes of what actually happened on the yacht during the journey home. This in itself is not that unusual a technique, but the writing styles Sigurðardóttir employs sets this novel apart from others with similar structure.

While the investigation chapters are fairly straightforward procedurals, the sections set on the yacht read like a thriller. So much so that those chapters could be separated from the book and stand as an action novel all on their own. The tension runs high as discoveries are made on the yacht. The legend that the vessel is cursed and possibly haunted only adds to the thrilling nature of these chapters. This is not to imply that the chapters with Thóra and her team trying to uncover the truth are unnecessary, but this distinct blend of thriller and procedural is not something often seen in crime fiction.

None of this would matter, of course, if The Silence of the Sea did not have a satisfying payoff at the end, but fortunately, Yrsa Sigurðardóttir is never one to cheat her readers. Keep the tissues handy because this book’s resolution is sure to have the tears flowing.

While The Silence of the Sea could be the end of the Thóra Gudmundsdóttir series, Yrsa Sigurðardóttir still has a healthy career ahead of her. Focusing now on stand-alones, new readers are sure to discover her talents and will hopefully seek out this excellent series where it all began.

REMINDER: The panel I am moderating at Bouchercon 2016 in New Orleans features Yrsa Sigurðardóttir, along with Rachel Howzell Hall, Karin Salvalaggio, Kate Horsley, and Kristi Belcamino discussing strong lead characters in crime fiction. I hope you will join us.