Lie With Me –
The BOLO Books Review

When the likes of Alex Marwood, Sarah Hilary, and Clare Mackintosh sing the praises of a novel, people listen – or at least this reader does. The most recent UK release from Sabine Durrant – Lie With Me – is just such a book, garnering positive critical responses from all corners. Following on with the current trend of unreliable narrators in crime fiction, Durrant takes it to the extreme in this novel. Everyone is guilty of telling a “white lie” now and again, but after turning the final pages of Lie With Me, what once may have been second nature is likely to become fraught with anxiety, guilt, and fear.

When Paul Morris runs into an old acquaintance at a secondhand bookshop, he has no idea that the encounter is going to set in motion a series of events and revelations that will alter his life forever. Paul is a critically acclaimed novelist who is insecure about his status in society and his inability to write a successful follow-up. Taken to puffing up his ego with exaggerations and out-right lies, Paul loves the attention from this virtual stranger. 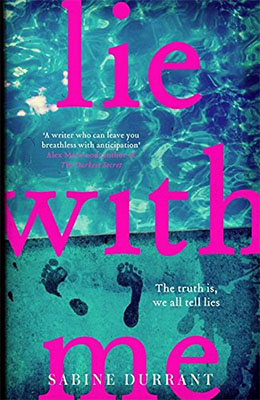 Quickly sucked into this man’s circle of friends, Paul meets Alice and naturally begins an affair with the striking beauty. Getting himself invited on their group holiday to Greece, Paul begins to feel surer of himself while expanding his web of deceit. However, he may not be the only one in the group with a penchant for grandiosity. There is an unsavory nature to the entire exchange between this odd collection of individuals.

All is going well until an investigation into the disappearance of a girl in the Greek village gets a bit closer than anyone at the villa would like. From there, things begin to spiral out of control; secrets from the past threaten to expose present-day truths and alliances are drawn in the sand.

As she navigates readers through all this, Sabine Durrant manipulates the reader’s emotions and loyalty to such an extent that even they themselves may become paranoid and suspicious. What is so impressive is that Durrant is able to create characters who are so forthright with their unreliability that readers (and the other characters) accept that as a natural trait rather than a flaw. When in fact, each should be thinking of the classic Maya Angelou quote: “when someone shows you who they are, believe them – the first time.”

Lie With Me would make a wonderful vacation read. Sabine Durrant’s writing style has an ease to it, added to the plot set in the Greek Isles, it’s only nature to want to consume this novel while lounging by a pool. Regardless of location, readers will be swept away by this novel and will find that it is not easily forgotten.