This appears to be the lingering question that will propel viewers through the first season of Riverdale. Oh, in case you hadn’t heard, Riverdale is the new television show (airing on The CW) based on characters from the Archie comics. 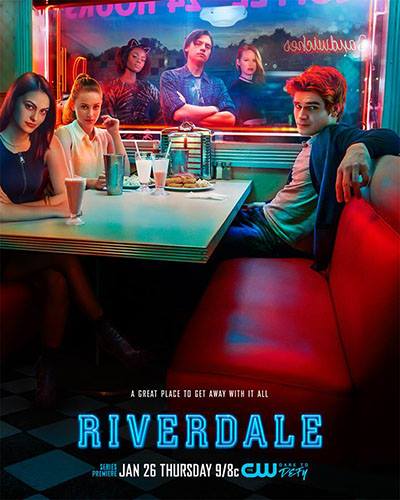 The first episode aired last night and it was every bit as enjoyable as anticipated. Roberto Aguirre-Sacasa and gang have managed to make Riverdale feel both vintage and modern at the same time. Opting to use the murder mystery format as a way into this world was a clever choice and one I, of course, whole-heartedly support.

Early buzz likened Riverdale to Twin Peaks and while this is not an incorrect comparison, the show also shares massive amounts of DNA with Pretty Little Liars, Gossip Girl, and Veronica Mars. And if that sentence makes you quake in your penny loafers, then this show is definitely going to be your next obsession.

All of our favorite characters are here: Archie, Veronica, Betty, Josie (and the Pussycats), Jughead, and Kevin. They resemble their inspirations, but with a decidedly modern and hyper-surreal edge. Aguirre-Sacasa has wisely decided to sex up the whole proceedings. Mentions of cover strip clubs, cougars, and embezzlement telegraph that this is not your mother’s Archie. Direct references to Twitter and Uber firmly contextualize the show within today’s world.

Speaking of references, Riverdale certainly doesn’t shy away from more erudite allusions. Early in the episode Veronica asked Archie and Betty if they know who Truman Capote is. She says “I’m more Breakfast at Tiffany’s and this place is more In Cold Blood.” Viewers also get mentions of Toni Morrison, Mad Men, and Blue Jasmine.

Make no mistake, Riverdale is nothing if not melodramatic. But somehow the blend of the noir and the comic sensibilities makes this feel organic rather than cheesy. The use of saturated color and camera filters ensures that Riverdale looks like no other show on television. At one point, Pop’s Diner looks like an Edward Hopper painting brought to life.

Riverdale is not without its flaws. Of course, I expected stereotypes, but I thought having Kevin, the one gay character, meet his latest fling in the men’s room during the high school dance was an unnecessary negative perpetuation of gay culture. And while the voice-over technique to frame the action works really well for this pilot episode, it could become grating over time.

That said, making perennial dropout Jughead our narrator was an inspired choice. His role as novelist/investigative reporter/outsider places him in the prime position to get all the dirt. And who would have known at the time the show was being made that the multi-racial Josie and the Pussycats would take on an even more radical feel thanks to the recent Women’s March on DC.

It’s foolish to judge a television show based on only one episode – especially the pilot episode – but this debut was certainly strong enough to ensure that I will be back for future adventures with the Riverdale gang.