Everyone recognizes that different people going through the same experience can – and likely will – tell very different versions of that shared incident. Matt Wesolowski is well aware of this and uses this knowledge to create a cunningly plotted mystery in his first novel, Six Stories. Banking on the public’s fascination with podcasts such as Serial and This American Life, Wesolowski centers his story on a fictional podcast devoted to uncovering the “true” story behind infamous cases plagued by conspiracy theories.

The tragedy at the center of Six Stories is the 1996 death of a teenager in the wilds of Scarclaw Fell. Located in the northern part of England, Scarclaw Fell is a foreboding, yet beautiful, landscape now notorious for the accidental death of Tom Jeffries. In the present day, Scott King – the host of the podcast Six Stories – interviews six key individuals with ties to the original incident in an effort to uncover what really happened on that fateful evening – revelations which might expose more than just an “accident.” 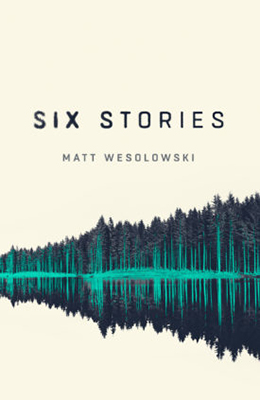 This unique structure allows Matt Wesolowski to present his story as six distinct chapters – in extended interview format – leaving the reader (or in the case of the fictional audience within the novel, the listener) to draw their own conclusions about who is telling the truth and who might be hiding some important information. As such, the majority of Six Stories relies on dialogue – or more accurately, monologue – to dispense the plot elements in carefully constructed fashion. Since these characters are telling their tale to the interviewer, Six Stories is heavy on exposition, which takes some adjustment in the reader’s expectations of how a novel functions, but once understood and embraced makes for a truly unique method of storytelling.

Towards the end of this slim novel, readers are told that “…you cannot tame a place like Scarclaw Fell” and this quote reflects the importance and vitality of location in the examination of this past event. The folklore of the area is intrinsic to understanding how the events of that summer night unfolded. Readers are told multiple tales of horror featuring unexplained entities that reside in the woods around Scarclaw Fell. Just how those nightmarish accounts tie into the unexplained death of Tom Jeffries is only a small example of the pleasures derived from settling deep into the atmospheric environment of Six Stories.

Each of the interview subjects represent distinct personalities types and readers will find that some appear more honest than others. These six interviews are separated by short vignettes featuring Harry Saint Clement-Ramsay, part of the family that owns the land around Scarclaw Fell – who also happens to be the very person who discovered Tom Jeffries’ body almost a year after he went missing. The juxtaposition between these two elements plays a critical role in how this story unfolds for the reader.

With Six Stories, Matt Wesolowski has shown that there are still new ways to excavate mystery within the crime fiction genre. From the sounds of his next crime novel, which promises to melt black metal with Icelandic sorcery, it seems that originality is going to remain his stock-in-trade throughout his writing career.