Calling a book that is only a year old a “cold case” may seem odd, but since I typically post reviews before a book is release, for BOLO Books this is a review of an older book.

Christopher Brookmyre will be the International Guest of Honor at the 2017 Bouchercon in Toronto, so I wanted to make sure folks knew about his books. I hope that readers will check them out before the event in October. You will see a review of her newest book here soon as well. But for now, here is a bit about Black Widow.

In Jack Parlabane, Christopher Brookmyre has created one of the great characters in modern crime fiction. A journalist who always strives to expose unjust behavior, Parlabane is not above breaking the rules to get the desired result. However, with Black Widow – his novel that won the McIlvanney Prize for Scottish crime book of the year – Brookmrye allows Parlabane to take a bit of a backseat and allows the two characters on whom the novel centers to take center stage. And readers would be hard-pressed to find two more interesting, unique, and fully realized players within the pages of a book.

Diana Jager is a surgeon who starts a blog to discuss the inequities she notices in the treatment of women within the medical profession. Dubbed by her adversaries as “Bladebitch,” she seems fearless in her quest for respect. But her devotion to her career has necessitated putting her personal life on the back burners. So, when she meets the new IT consultant at the hospital, she is surprised by her interest in him – and his in her.

Peter Elphinstone comes from a notable family. Encouraged by this father to become a success on his own, Peter latched on to the world of computers as his area of expertise. Working with investors to developed the next hot “app,” he subsidizes his income by working with the hospital IT team. Upon meeting Diana, he is immediately intrigued and interested. 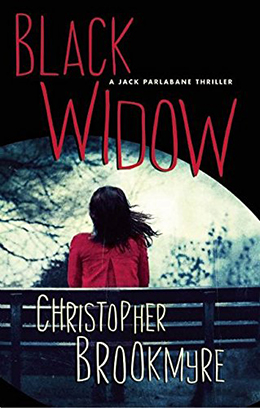 Eventually, the two get married. All is well until the night a caller to emergency services reports having seen a car go over the side of a particularly notorious curve in the cliffs of Scotland – a car that turns out to be Peter’s. But was it an accident, suicide, or possibly murder.

Christopher Brookmyre has crafted a structural masterwork with Black Widow. Beginning with the trial resulting from the car crash, he constantly shifts perspective between Diana, Jack Parlabane, and the detectives investigating the tragedy. By doing so, Brookmyre manages to manipulate – in only the best sense of the word – readers, cleverly disguising what is really happening with consummate skill. If ever the phase can’t see the forest for the trees applied to a novel, this is that time. With well-placed red herrings, unreliable participants, and more than a fair share of evasion, make getting to the truth of what happened a hard-fought journey – for both the characters and the reader.

To say any more about the plot would be to spoil things for the reader. Christopher Brookmyre’s writing style is unique and it takes a number of chapters for readers to sink in and feel comfortable with his technique – his prose tends to be exposition-heavy and lighter on dialogue. Readers just have to trust that there is a reason for this and that the rewards will be worth the effort in adjusting one’s narrative expectations. Brookmyre uses an out-of-fashion technique of naming his chapters – chapters that unspool more as mini-vignettes – but makes it feel modern with the names he chooses. Chapter headings like Terra Incognita, NSFW, and Mating Porcupines feel fresh and contemporary and entice the reader to explore deeper.

Black Widow is part of a series and while Jack Parlabane does have some baggage carrying on from earlier books – things like losing his job as a journalist and suffering through a divorce – this novel works well as an entry point into Christopher Brookmyre’s work. Because the focus is on the relationship between these two characters, new readers will have no trouble falling under the spell.