The Force – The BOLO Books Review

Starting with a three-page dedication listing all the police officers who died in the line of duty during the time it took to write The Force may seem an odd way to open a novel about a corrupt NYPD detective, but it proves to be a powerful message representing the unity and loyalty felt among the brothers in blue.

Point in fact, to say that The Force is about a corrupt detective is to unfairly distill a complex novel down to a single soundbite. Rather, the novel charts the course of how participating in small infractions can over time lead to a malignant aura of superiority and invincibility within even the most celebrated and steadfast members of any organization.

Treading a very fine line between respect for the institution of law enforcement and the acknowledgement that institutionalized corruption is not a fallacy would seem to be a tricky prospect, but Don Winslow makes it look easy. He manages this by centering the novel on Dennis Malone – a deeply flawed protagonist if ever there was one. Throughout the novel, it is hard for readers to bond with Malone – most of his rhetoric and actions are completely off-putting – but there is little doubt that he is a compelling figure designed as a version of Charon, ferrying readers to a venal wasteland of depravity. 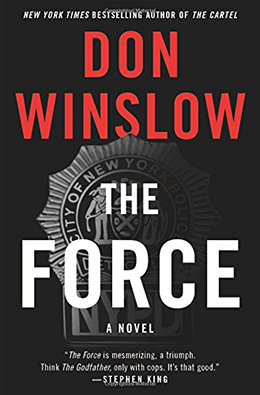 The Force by Don Winslow

The pacing of The Force is going to be a love it or hate it element. Never exactly boring, Winslow packs the story with so much information and backstory that even the action scenes unfold at a determined, yet strangely leisurely-feeling pace. Part of this seems intended to create an epic feel to the novel, which works in contrast to the very specific story of one particular law enforcement division. How well this works will vary widely from reader to reader.

Make no mistake about it, while The Force concerns itself primarily with law enforcement, Winslow is not above showing the warts in all corners of our socio-political structure. His goal is not to condemn the Denny Malones of the world – although Winslow is in no way justifying that behavior – but rather to document the decline in the flawed system we have in place today.

The Force is not a short read and some readers will be unwilling to spend their time in such a dismal and depressing worldview, but for those that are willing to undergo the journey, a better understanding of the nature of rot – and just how close right and wrong coexist in our modern world – will be the reward.