The pilot episode of The Deuce, the new HBO drama from David Simon and George Pelecanos, is currently streaming on the premium network’s digital service. As you probably already know, this series is a look at the gritty world of prostitution and pornography within Manhattan during the 1970’s and 1980’s. 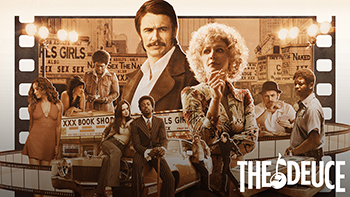 This first episode is set in 1971 and serves as an introduction to the ensemble cast. As with both The Wire and Treme, The Deuce has a large and diverse cast representing all aspects of the topic at hand. Since we only have the first episode at this point, it is hard to predict how quickly the show will move through the decades, but it is clear that viewers are being introduced to these characters at the beginnings of what will be their complicated dramatic arcs throughout the duration of the series.

As a true ensemble piece, it would be fool-hearty to discuss any particular characters are the main focus, but nevertheless a few of the folks populating this dank world are pivotal during this pilot episode.

First among them is Vincent Martino – one of the twins played by James Franco. In this episode we see him struggling with multiple low-wage jobs in various bars around town. He has a wife and child he is trying to support and tries out various schemes to attract customers to the struggling bar establishments. Eventually one of those ideas seems to be paying off, but not before Vincent’s marriage begins to crumble.

The other character who gains significance throughout the episode is the prostitute played by Maggie Gyllenhaal. Named Candy, this role highlights a lesser-known aspect of life in this den of depravity. Candy is a hooker without a pimp. Women in prostitution are often – and justifiably – portrayed as abused victims of society and the men in control, but not Candy. She doesn’t need any man to handle her finances, negotiate her terms, or protect her life and interests. This is an important addition to this television show, which could easily have become the dramatic caricature of white man’s privilege and societies tendency to devalue the feminine.

True to the period, much racial diversity and economic stratification is present in The Deuce. So far, most of the African-American men introduced are pimps and the women, prostitutes. But characters like Dominique Fishback’s Darlene hint at the fully fleshed out personas that will develop over the course of the series. A highlight of this pilot episode is a scene in which Darlene spends her time with a “John” watching the film version of A Tale of Two Cities rather than having sex.

Speaking of highlights: The level of detail presented in this historic setting is impressive. Locations, props, cars, and clothing all feel very authentic to the period. And technically speaking, the scene where James Franco’s twins meet for the first time on camera is mind-blowing. Gone are the days where you see the face of one twin and the back of the head of the other – and vice versa. Here it seems as though there really are two James Franco’s in that bar setting. This was very skillfully handled.

Populating the rest of the cast are both veteran actors and newcomers. Viewers are introduced to Lori, a girl who has recently relocated to New York City. It remains to be seen if she is naïve or calculated in her immediate choices in this new location. There is also an NYU student named Abby who quickly becomes entangled with some of our major players. Gary Carr’s pimp daddy seems destined to be the source of trouble, which is in direct contrast with Lawrence Gilliard Jr.’s Officer Chris Alston.

Promos have shown a slew of other characters yet to be introduced so it appears this show will really cover the gamut of personalities present as the prostitution path merged with that of the rising pornography industry. Hints of violence to come will interest crime fiction fans – as will the fact that along with George Pelecanos, Megan Abbott, Lisa Lutz, and Richard Price are all part of the writing team for The Deuce.

Given this pedigree, it is no surprise that viewers will be hooked – pun intended – once they watch the pilot episode of The Deuce.