Today is launch day for Cheryl L. Reed’s new thriller, Poison Girls. As soon as I heard the premise behind this novel, I was intrigued and I am happy to welcome Cheryl to BOLO Books to tell you a bit more about how this novel came to be. I’d be shocked if you aren’t ordering a copy by the time you get to the end of the post. (Conveniently, you will find order links at the bottom of the page)

Telling the story of heroin and girls
By Cheryl L. Reed

Every crime novelist comes to the genre by way of their own unique navigation. My map starts when I was a street reporter, vicariously living through my subjects, using my job to infiltrate subcultures and soak up their secrets. When I was a newspaper crime reporter—back in the day when people read newspapers—my work provided access to the macabre and the maddening. I interviewed mothers who forced their babies to drink Draino, love-struck girls whose boyfriends convinced them to kill strangers for their sneakers, and teenage serial killers who detailed their crimes with dry eyes.

There are stories, though, that dig into your soul. And the one that bore into me was the summer I hung out with teenage white girls who were experimenting with crack cocaine. For months I followed them around, learning the words to their music, picking up their vernacular, mimicking their dress. I wasn’t undercover. They knew I was a reporter. But I wanted to understand them down to the twisted leather bangles on their wrists.

After three months, I had a story, but not the story I had intended to write. Because on the eve of publishing, one of my subjects was shot. You never stop questioning the what-ifs, and rewinding the scenes you wish you could do over. So, when a decade later I started reading about teenage girls in Chicago dying of poisoned heroin, I knew this story—or at least its essence.

Most novels about drugs are heavy on testosterone. They feature muscular drug dealers weighted with bling and sympathetic male addicts. If there are any women in these stories, they are usually the trite “heart-of-gold” girlfriends who help their boyfriends to either get off drugs or make a crafty score. Very few books feature the drug culture among girls or what I considered true depictions of street level drug dealers.

I wanted Poison Girls to tell those stories, as well as feature a female crime reporter, another rare character in novels about drugs, who is caught between the failing business of journalism and the crime world she covers. The prevalent view of female reporters in popular culture seems to be limited to those who ride up in satellite trucks and stand in front of bright lights, their faces caked with makeup. No offense to my broadcast colleagues, but these aren’t the folks who are infiltrating subcultures and telling the raw stories of real people.

And so, as I wrote Poison Girls— a story about girls from Chicago’s prominent political families dying mysteriously of poisoned heroin and the reporter who is obsessed with tracking down their killer—I used tricks I had in my reporter’s bag to make the story feel more authentic. Besides hanging out in heroin neighborhoods, I planted myself in drug court and listened to the young women getting convicted and the judges who convicted them. I went to the Cook County Jail, the largest in the United States, and even spent a year teaching writing classes in a maximum-security prison to former gang bangers who revealed in very visceral terms what it was like to deal drugs and how they tried to justify killing people in their way or be killed. I did this because I wanted to get at the messy truths in the story about heroin.

There are no innocent characters in Poison Girls. Like the real world the book tries to depict, no one connected to drugs—neither parents nor cops nor the dealers themselves—ever comes away feeling blameless. Poison Girls is about an underworld where drugs, cops, gangs, politics, and privilege collide. 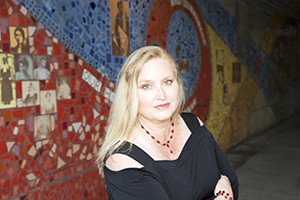